Woman barges into Jewel Changi store, smashes items and drags manager out by her hair 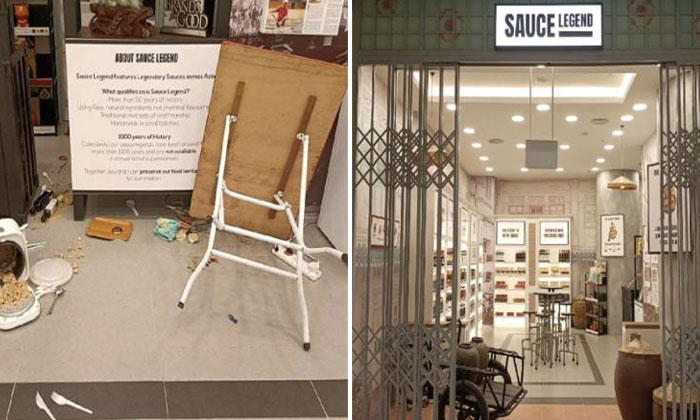 She was the only one tending the store on Saturday afternoon (Aug 27) when a woman barged in, wreaked havoc and even assaulted her.

Ms Lee told Shin Min Daily News that at 1pm, a woman, who appeared to be in her 50s or 60s, ran into the store, flipped over a table and smashed some items onto the ground.

She even smashed a showpiece trophy that the National Heritage Board had awarded the shop owner’s mother, the second-generation owner of Nanyang Sauce.

Writing in a Facebook post, Ms Lee said it was "the most valuable item" in the store.

When Ms Lee tried to stop the woman from leaving, the latter grabbed her hair and dragged her outside.

"She had a lot of strength, and I couldn't break free from her hold," Ms Lee told Shin Min, adding that the woman was muttering gibberish throughout the ordeal.

"I felt scared and embarrassed at the same time, as if I was being paraded in public for doing something wrong."

Two eyewitnesses shouted at the woman to stop, but she continued to pull on Ms Lee's hair. The woman fled the scene only after a bystander stepped in.

Today I was attacked in my shop...of all things....the attacker smashed the most valuable item

Ms Lee said some of her hair had been pulled out by the woman. Fortunately, a doctor assessed her injury to be minor.

In a photo posted by Sauce Legend on its Facebook page, the store was left in a state of disarray, with the rice cooker full of chicken rice toppled over, and broken bottles of soy sauce and utensils scattered across the floor.

Dear Customers, we will be closed for the rest of today due to an unfortunate incident caused by an unidentified...

Ms Lee revealed that she had seen the woman patronise the shop a couple of times previously – the last time she saw her was one to two months ago.

Whenever she came by, she would mutter unintelligible words, but never showed any signs of violence.

The woman has a small build and always wore a long dress whenever she came by. She also carried a backpack and some bags with her. During Saturday's encounter, she was dressed the same way too.

The police are investigating the matter.