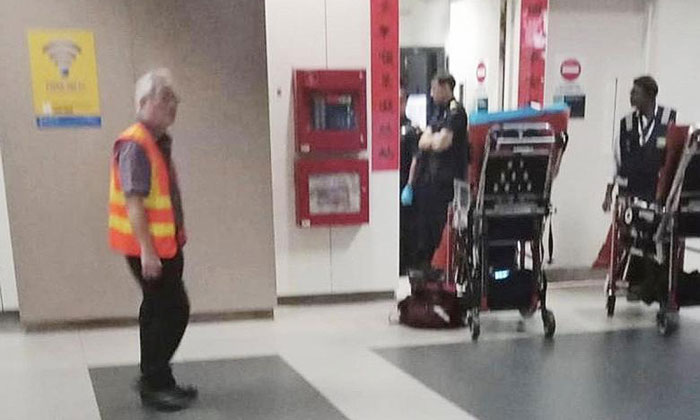 A spat between a couple at Bedok Bus Interchange on Monday (Apr 8) turned violent when the woman allegedly took a pair of scissors to attack the man.

First, she started kicking and hitting him as they argued.

Eventually, he hit her back.

Furious, she ran into a nearby cosmetics shop and grabbed a pair of scissors.

Both were bleeding by the time the police arrived.

The incident, involving a 27-year-old woman and a 29-year-old man, happened around 2.30pm.

She said: "She kicked him and punched him in the head, and he started bleeding. I believe she was holding a key, or something else sharp."

Mr Sazali Sidek, 46, was manning an electricity retailing booth a few stalls away. He told The New Paper that he heard the man shout: "Please someone help to stop her."

The man finally could not take it and he hit the woman back, causing her to bleed too.

By that point, a crowd had gathered around them, Mr Sazali said.

After a while, the woman ran into the cosmetics shop. She grabbed a pair of scissors that the shop staff used, and ran out to try to attack the man with it.

Mr Sazali said: "One of the SBS Transit staff was able to catch hold of the woman's hand and took the scissors away."

Shin Min reported that around 10 people helped to pin down the man, while another three did the same to the woman.

He added that the police and the Singapore Civil Defence Force (SCDF) arrived about 20 minutes later.

The police said they were alerted to the incident at 2.52pm.

The pair were taken to Changi General Hospital in two SCDF ambulances.

Mr Asri Bin Ajis, 41, a Transitlink technical officer, told TNP that there was a bloodstain about the size of an open palm on the floor and several more small drops of blood.

The woman was subsequently arrested for voluntarily causing hurt by dangerous weapon, a police spokesman said.