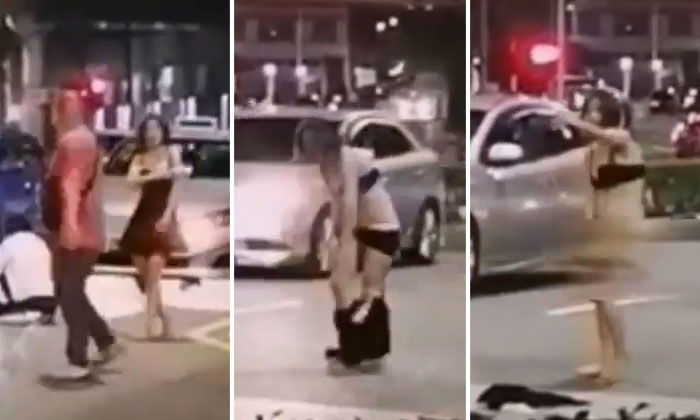 A 31-year-old woman has been arrested for public nuisance after removing her clothes in an argument with a taxi driver at Middle Road in the early hours of Thursday morning (Oct 24).

Several Stompers alerted Stomp to a video of the incident that has been circulating online. It has been masked by ROADS.sg's Facebook page administrators.

In the video, the woman is seen shouting and chasing after a man in a red T-shirt who is believed to be the cabby.

She points at him before inexplicably removing her dress and underwear in the middle of the road.

Another man approaches her and pulls up her panties while blocking her from chasing after the cabby again.

A witness shared his account of what happened with ROADS.sg.

According to him, he heard shouting across the street and saw the woman kicking the taxi.

He said he saw the woman chasing the cabby, scratching him, throwing punches and her handbag at him.

He wrote: "He didn't lay any hands on her (I saw his every effort of doing his best, respect him as a gentleman)."

In response to a Stomp query, the police said they received a call for assistance along Middle Road at about 2.11am.

"A 31-year-old woman was arrested for public nuisance," a police spokesman said.