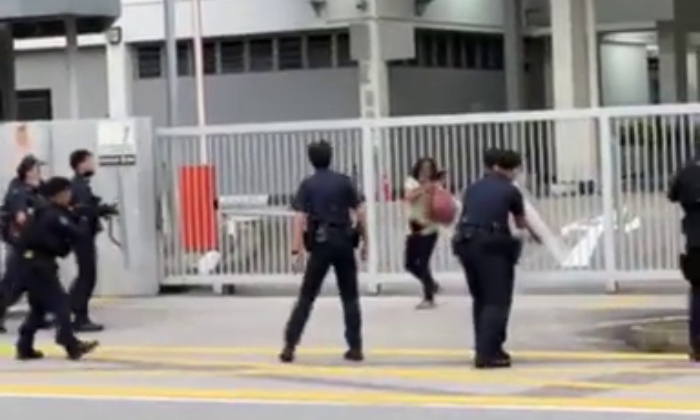 The police have arrested a woman who wielded a knife outside a secondary school in Tampines on Monday evening.

The 53-year-old woman had stabbed herself in the abdomen and was tasered before her arrest.

Police were alerted at about 6.30pm about the woman, who was near Block 840 Tampines Street 82.

In videos posted online, the woman - who was wearing a green top, black pants and with a red bag looped around her waist - was seen surrounded by at least 10 police officers outside St Hilda's Secondary School.

At least three of the officers were decked in tactical gear and held what looked like sub-machine guns. At least one officer was holding a transparent police shield.

The woman was seen alternating between shouting and speaking to the officers in a mix of English and Malay.

At one point during the stand-off, she looked to be making a phone call with her left hand and dropped something from her right hand.

One of the police officers then kicked her while several other officers moved in to arrest her. At least five officers were observed pinning her on the ground.

Passers-by were seen looking at the commotion across the two-lane road, while a police officer was observed directing traffic along the road.

"When police officers arrived, the woman was uncooperative and refused to comply with police's instructions," said the police.

"The woman then stabbed herself in the abdomen and threatened to further harm herself."

A police officer discharged a taser to prevent the woman from injuring herself.

The Singapore Civil Defence Force was alerted at about 6.50pm and sent her to Changi General Hospital. She was conscious and in stable condition.

The woman was arrested for possession of an offensive weapon in a public place, suspected drug-related offences and was also apprehended under the Mental Health (Care and Treatment) Act.

Elderly woman believed to be in her 70s brandishing 2 weapons, allegedly knife and scissors, has stand off with at least...