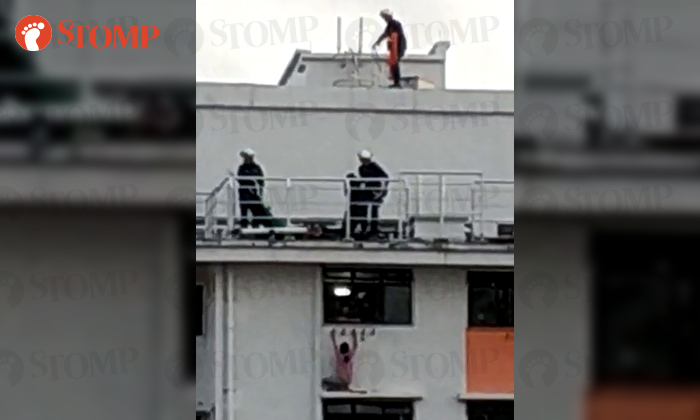 A 42-year-old woman was arrested after being seen crouching on a window ledge at Block 227 Lorong 8 Toa Payoh on Monday morning (July 29).

Stomper Husain, a resident in the vicinity, said he was leaving for school at around 7am when he noticed a commotion across his block.

A video that he took shows a woman perched on the 16th-floor ledge while she held on to pipe socket holders outside the window.

At least four rescuers can be seen on the roof of the block.

Stomp understands that police officers rescued the woman by pulling her back into the unit.

"When I looked across, the woman was hanging outside the window on a very narrow ledge.

"Thanks to the outstanding bravery of the officers, the woman was safely brought inside the house."

Responding to a Stomp query, the police said they were alerted to a case of attempted suicide at the block at 6.40am.

The woman was conscious when taken to Tan Tock Seng Hospital and was subsequently arrested in relation to the case.