Woman apprehended after getting rescued by DART officers at Yishun block 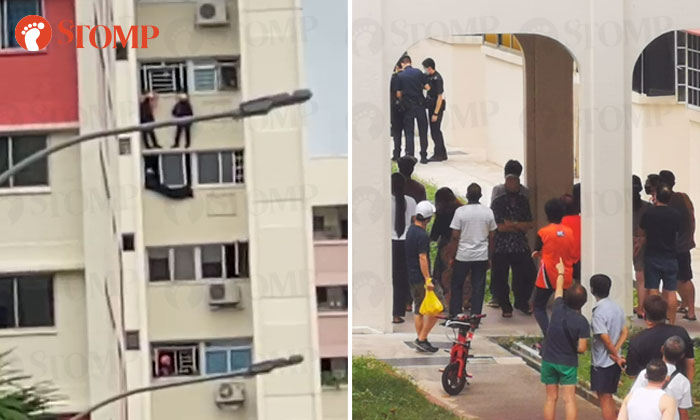 A 49-year-old woman was apprehended after she was rescued from Block 266 Yishun Street 22 on Friday morning (June 12).

Stomper Desmond alerted Stomp to the incident and shared a video he took of the scene.

In the video, Disaster Assistance and Rescue Team (DART) officers from the Singapore Civil Defence Force (SCDF) are seen standing by with nets at the block.

In response to a Stomp query, the SCDF said it received a call for assistance at 9.30am.

"SCDF deployed nets and DART rescuers rappelled from the unit above to rescue the person."

The police said they received a call for assistance at 9.24am.

"A 49-year-old woman was apprehended under Section 7 of the Mental Health (Care and Treatment) Act," a police spokesman said.

Stomp earlier reported on two similar incidents that happened on the same day.

Two men were arrested for drug-related offences after DART officers rappeled down a Circuit Road block to rescue one of them.

Separately, a 59-year-old woman was arrested after getting rescued from the ledge of a Yishun block.

Related Stories
2 men arrested for drug-related offences after DART officers rappel down Circuit Road block to rescue 1 of them
59-year-old woman arrested after getting rescued from ledge of Yishun block
SCDF rescues woman who fell into Singapore River after allegedly consuming too much alcohol
More About:
rescue
scdf
DART
arrested