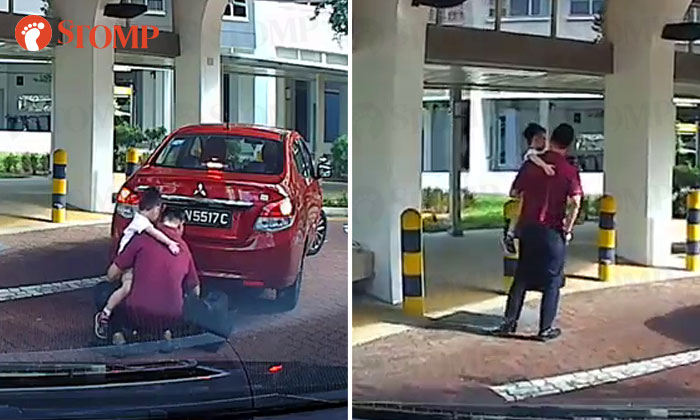 Stomper Som is looking for a man who picked up her iPhone 11 Pro Max near Block 116A Jalan Tenteram on Thursday (Feb 27).

She told Stomp she had dropped her phone while getting out of her car at Tenteram Peak at about 4.50pm to pick up her son.

She had not realised at the time that she had dropped it.

"A little while later at about 4.53pm, a guy got out of a car with his son and saw my phone on the floor," she said.

She shared with Stomp footage taken from her vehicle's in-car camera of the man crouching to pick up an item on the ground and later slipping it in his pocket.

"My husband had gone around the roundabout while waiting for me to come back to the car with my son and the camera managed to capture the man picking up my phone," she said.

"I tried to call my number but he has turned off my phone," she said.

"If anyone knows this man, please inform him I need my phone back.

"It's not about the value of the phone but because all of my kid's photos are in there.

"Nothing can buy this back."

Related Stories
Man offering $4k reward for return of missing 4D tickets that won $27k, police investigating
Owner appealing to ladies who picked up her $40k watch outside OrangeTee Building to return it
Single mother puts up note after losing purse containing $800 at Telok Blangah -- but later finds it torn up
More About:
phone
lost
appeal