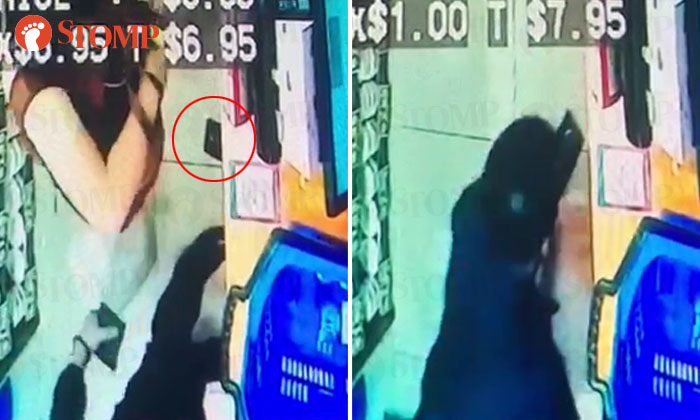 Stomper Rachelle is appealing to the man who picked up her wallet that she dropped in a store at Northpoint City to return it to her.

She told Stomp that she was shopping at the Valu$ shop in the mall on Mar 9 at about 6.50pm when she dropped her wallet in front of the cashier counter.

She only realised her wallet was missing about half an hour later.

When she returned to the store, it was not there anymore.

The store's management shared CCTV footage of what happened.

In the video, a man is seen picking up Rachelle's wallet from the floor after she has left.

"My work permit is inside as well as all my ATM cards," she said.

"I also have about $100 in Singapore dollars and about $200 in foreign currency from seven to eight countries."

She told Stomp she made a police report the same night.

Rachelle, who has been working in Singapore for five years, said the experience has been quite traumatic as this is the first time this has happened to her.

"I hope that netizens can help me find this man," she said.

Related Stories
Guy caught on camera riding man's e-scooter away from alley behind restaurant at Gemmill Lane
Man who pickpocketed Stomper's wallet in Ang Mo Kio arrested after Stomp report
Why so yao kwee? Woman helps herself to 'at least 480' ang pows from Teck Whye Lane temple
More About:
wallet
theft
stealing
caught in the act
caught on video