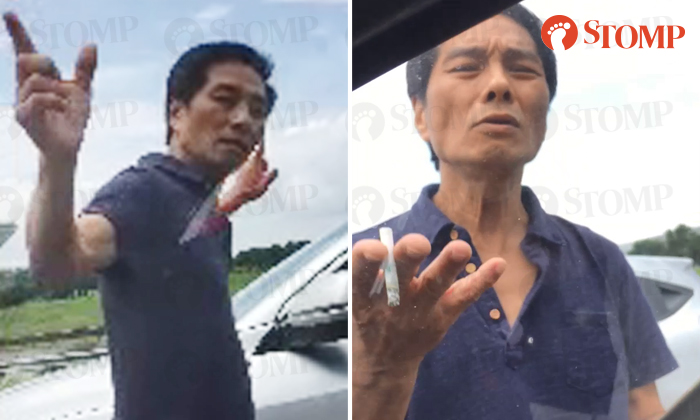 In response to a Stomp query, the police said they were alerted to a case of intentional harassment at around 2.31pm along Tampines Link.

Stomper XH was 'trapped' in her car with her eight-year-old nephew during a dispute with a Honda driver along Tampines Link, at around 2.28pm on Feb 4.

According to XH, she was stuck in her car for about 26 minutes as the driver had blocked her way and behaved aggressively towards her from outside her vehicle.

XH described what led to the dispute: "I wanted to turn right to the road from the temple. I checked both sides for traffic. The road was clear on the left and I saw a silver car on the right.

"Since the driver was still at quite a far distance, I decided to make the turn.

"But when the driver saw me exiting the road from the temple, he pressed down on his car horn without releasing it. I also believe that he sped up on purpose.

"Knowing that he was refusing to give way, I immediately reversed my car. However, he then stopped his car in the middle of the road and blocked my car."

XH explained that the driver was on a small two-lane road and was obstructing other motorists, who had to go past him by using the second lane when it was clear of traffic from the opposite direction.

The Stomper continued: "The driver came out from his car looking aggressive and walked towards me. While he was approaching me, I quickly locked my car.

"He stood outside my car and scolded me. He also took pictures and videos of my car (even the interior), myself and my nephew.

"He then banged on my window and tried to open my car door by pulling on the handle. He challenged me to get out of my car but I did not want to as he looked so fierce and threatening.

"I couldn't drive off as he was blocking my way. Neither did I dare to in case he chased me or caused an accident, then accused me of hitting him."

XH, who called the police, said all she had on her mind at that point of time were three things:

Stomp understands that XH had already left when police arrived at the scene.

She managed to leave the premises after two men approached her and informed her of an alternative route that she could use.

"Two men came up to me and asked if I could move my car as I was blocking the road to their temple. I'm not sure if they were visitors, workers or volunteers there.

"I explained the situation to them and said the driver was blocking me. They then told me where to exit instead."

XH added that she felt "very panicked" and helpless during the incident, especially since her phone battery was running low and she was worried about her nephew.

"Both the child and I were very scared. I didn't know what to do. If I was alone, I wouldn't have been so frightened. But was what I supposed to do?" she told Stomp in a phone interview.

In response to a Stomp query, the police said they were alerted to a case of intentional harassment at around 2.31pm along Tampines Link.