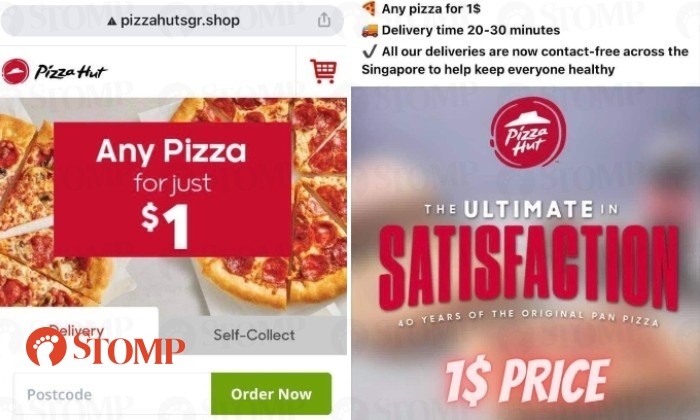 When Stomper Airah saw that she could get her hands on some Pizza Hut treats for just a dollar, she was more than thrilled.

But just as she was making payment, she realised that this deal was too good to be true. And she was right.

Airah told Stomp that she spotted the fake advertisement on Tuesday evening (Nov 24) while scrolling Facebook.

The advertisement was laced with captivating deals with the intention to lure potential victims to the scam website.

"When I saw this advertisement, I thought I landed on a great deal and was excited to pay $1 for my meal," Airah said.

"I clicked the link I saw on the Facebook post and it led me straight to what I thought was an official Pizza Hut website. It actually looks so real that I didn't suspect anything at first.

"So, I quickly added pizzas to my cart and entered my bank card details on the payment page.

"Then I suddenly had this gut feeling that something wasn't right. Firstly, the payment page was loading really slowly and secondly, the website asked for my bank password instead of the usual One Time Password (OTP)." 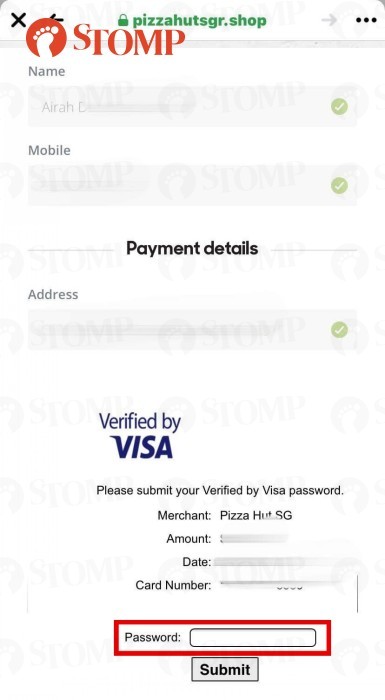 Airah added that she quickly exited the page and pulled her bank card details from the website.

"It was a close shave, I knew my gut feeling couldn't be wrong," she said.

"I wanted to share this because I hope to warn others to be careful of such fake websites. They may look real and the deals may sound great, but they're actually just out to take your money.

"I've seen many victims of scams in the past. I'm glad I wasn't one of them and I hope this serves as a reminder to be very careful when you're online."

In response to a Stomp query, a spokesman for Pizza Hut said: "These promotions are not valid and the sites and ads do not belong to us. We are currently conducting investigations and have also reported the matter to the police as well as Facebook."

The spokesman added that Pizza Hut has warned customers via a Facebook post to stay away from such fake websites.

Dear customers, it has come to our attention that there have been false advertisements and impersonation of our Facebook...

"If you see any ads or posts directing people to the scam site, please do not provide any personal information or make payment for the false offers," said the spokesman.

The police also said in a statement that they would like to alert members of the public to phishing scams involving fake Pizza Hut advertisements.

"In this variant, victims would come across a fake advertisement on Facebook or Instagram, offering cheap Pizza Hut deals," said the police.

"After clicking on the URL link embedded in the fake advertisement, the victims would be directed to a fake Pizza Hut website where they were purportedly deceived into placing their pizza orders by providing their banking details and One-Time Passwords (OTPs) for payment.

"Most of the victims only realised that they have been scammed when they subsequently discovered unauthorised transactions in their bank accounts."

The police advised members of the public to adopt these crime prevention measures:

Anyone with information on such scams may call the Police hotline at 1800-255-0000 or submit information online at www.police.gov.sg/iwitness.

For more information on scams, members of the public can visit www.scamalert.sg or call the anti-scam helpline at 1800-722-6688.

"Join the ‘Spot the Signs, Stop the Crimes.’ campaign at www.scamalert.sg/fight by signing up as an advocate to receive up-to-date messages and share them with your family and friends," added the police.

"Together, we can help stop scams and prevent our loved ones from becoming the next victims."

Related Stories
Nanny who took deposits from 4 mums for Nov confinement accused of scamming roommate of over $10k
2 men arrested for cheating e-commerce site of $69k by claiming not to have received purchases
Seen this advertisement that appears to be from Grab? It's a scam
More About:
scam
fake
pizza