Woman alleges son, 1, was struck in head by ceiling panel that fell with oxygen tank on flight 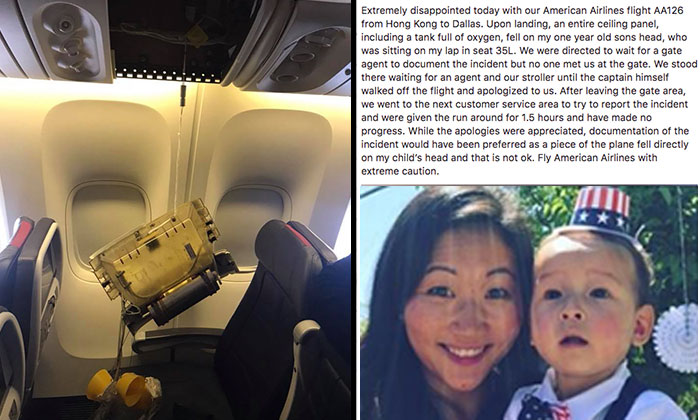 A passenger alleged that her baby boy’s head was hit by a ceiling panel which had fallen along with an oxygen tank during an American Airlines flight AA126, from Hong Kong to Dallas.

In her post, Facebook user Jennifer Zanone, 33,  said that the plane had arrived at Fort Worth International Airport on Saturday (April 7) at about 3.30pm, reports Lianhe Wanbao.

Upon landing, however,  an entire ceiling panel, and a tank full of oxygen were dislodged and fell on her one-year-old son’s head.

“Upon landing, an entire ceiling panel, including a tank full of oxygen, fell on my one-year-old sons head, who was sitting on my lap in seat 35L.

“We were directed to wait for a gate agent to document the incident but no one met us at the gate. We stood there waiting for an agent and our stroller until the captain himself walked off the flight and apologised to us.

“After leaving the gate area, we went to the next customer service area to try to report the incident and were given the run around for 1.5 hours and have made no progress.

“While the apologies were appreciated, documentation of the incident would have been preferred as a piece of the plane fell directly on my child’s head and that is not ok.”

In response to media queries, a spokesman for American Airlines said that airline crew had asked Jennifer if she required medical assistance for her son, and she declined the offer.

Jennifer confirmed that although the crew had offered her medical assistance, she was still dissatisfied with the way they had handled the entire situation.