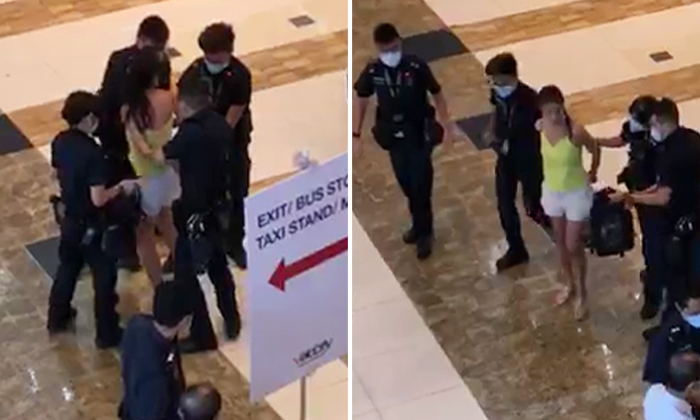 A 35-year-old woman was apprehended after an altercation with a man at a restaurant and the police at Novena Square on Tuesday (Oct 13).

Several readers alerted Stomp to a video showing the woman shouting while being apprehended by police officers, who can then be seen leading her away.

In response to a Stomp query, the police said they received a call for assistance at Novena Square at 4.24pm.

"A 35-year old woman had shouted randomly at an unrelated male patron in a restaurant and allegedly poured a bowl of soup over his head," said a police spokesman.

"In an attempt to confront her, a scuffle ensued which led to the woman spitting at the man and biting his right hand."

The 32-year old man was conscious when taken to Tan Tock Seng Hospital.

The woman continued to shout incoherently during the engagement with police officers in the shopping mall.

Her next-of-kin, who had arrived at the scene, also could not calm her down.

"As she was assessed to be posing a danger to herself and the public, she was subsequently apprehended under Section 7 of the Mental Health (Care and Treatment) Act," police added.

The woman is also being investigated for voluntarily causing hurt and using criminal force to deter a public servant from carrying out his duties. She had hurled verbal abuse and also spat on the officers in the process.

The woman is currently receiving treatment at the Institute of Mental Health.