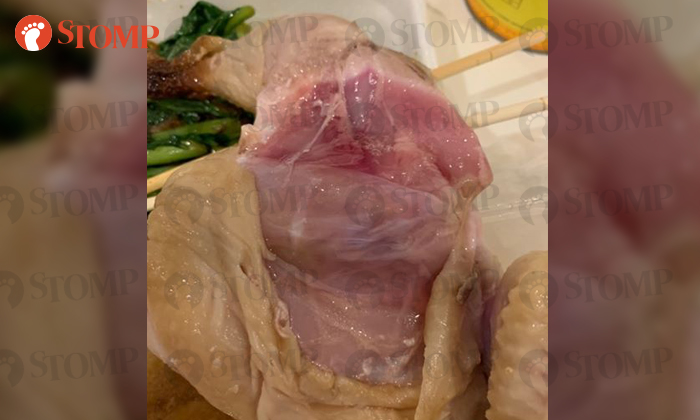 Stomper Carol was disgusted when the herbal chicken she had ordered from Chinese restaurant Johnson Duck via Deliveroo turned out to be not properly cooked.

Carol told Stomp that she had ordered her dinner on Deliveroo last Thursday (Nov 7), at around 6.30pm.

The meal, which consisted of half a herbal chicken and oyster sauce vegetables from Johnson Duck's Bukit Panjang branch, arrived at about 7.10pm.

Carol recounted: "I had the broth from the herbal chicken first.

"I then used disposable chopsticks to try and pierce the chicken, but found it too tough. When I removed the chicken skin, I discovered that only 1/4 of the meat was cooked."

A photo that the Stomper contributed show the chicken meat in a reddish hue.

Carol, who said the vegetable dish was fine, added: "I was scared that the uncooked chicken had contaminated the broth too so I stopped eating the entirely dish.

"I drank a lot of water to detox and try to flush things out, but still suffered a stomach upset later in the middle of the night.

"I cannot say for sure if the stomach upset was caused by the uncooked chicken but I believe that there is a high chance it might be.

Carol subsequently informed Deliveroo about the incident and was offered a refund.

"I also called Johnson Duck the same evening and the following morning, but there was no answer," she said.

In response to a Stomp query, a spokesman for Deliveroo said: "Food safety is an absolute priority for us and we know our customers would expect nothing less.

"Our restaurant partners are required to maintain the standards set in our hygiene policy, and we conduct checks as well as collect and share customer feedback regularly, to ensure food quality standards are satisfactory."

The spokesman told Stomp that the high standards which Deliveroo expects of its restaurant partners were "unfortunately not met" in this particular case.

"Aside from processing a full refund to the customer, we are in the process of speaking to the restaurant to understand more and will work closely with them to improve their hygiene standards," added the spokesman.