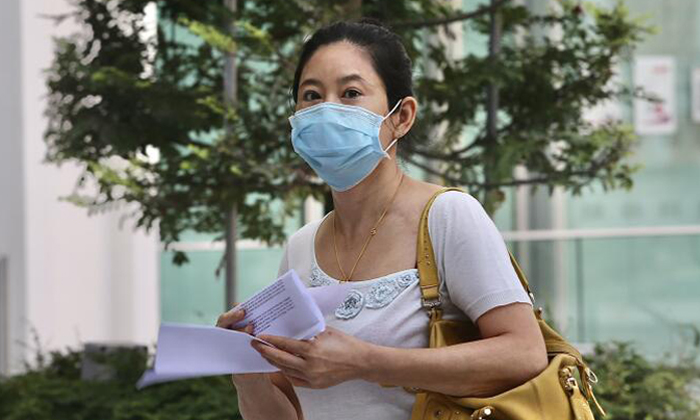 Beauty salons and such have been ordered shut under measures introduced to stem the coronavirus spread, but that did not stop one woman from allegedly offering massage and sexual services.

Jin, a Singaporean, was one of three charged yesterday with flouting a control order under the Covid-19 (Temporary Measures) Act. She also faces two charges under the Massage Establishments Act for providing massage services at her salon without a licence, and for advertising the massage services.

The court heard that Jin was caught allegedly providing the services between 1pm and 2.30pm at In-Style Beauty Salon in Upper Cross Street. It was not mentioned if Mr Chan is facing any charges.

Beauty salons are among a number of non-essential services ordered to shut during the circuit breaker that started on April 7.

In tears yesterday, Jin told the court she intends to plead guilty, adding: "I know I did wrong." She is due back in court on May 13.

Two others were also charged yesterday with flouting the control order.

In separate cases, 36-year-old Rajalakshmi Sukomaran, and Sethu Selvaraj, 43, are each facing a charge of leaving their respective residences on April 19 for an unspecified purpose.

During this circuit breaker period, people are allowed to leave their homes only under specified circumstances, including to buy food and groceries, exercise, or to work in essential services.

Those convicted of contravening a control order under the Covid-19 (Temporary Measures) Act can face a financial penalty of up to $10,000, a jail term of up to six months, or both. Repeat offenders will face double the penalties.

Meanwhile, two others are facing harassment charges over matters related to Covid-19.

Abdul Halim Adi, 48, is accused of using abusive language on a social distancing ambassador who was performing his duty as a public servant at Hougang Mall on April 14.

Karthigayen Balasubramaniam, 32, faces two charges of harassment, for allegedly uttering vulgarities at two persons during an argument over face masks at Our Tampines Hub on April 12.

He told the court he "did not scold anyone", and will not be pleading guilty.

Those convicted of harassment can be fined a maximum of $5,000, and may face a jail term of up to six months.

Repeat offenders will face enhanced penalties, including a fine of up to $10,000 and a maximum jail term of 12 months.

If the victim is a public servant performing public duties, the offence carries a maximum jail time of 12 months, even for first-time offenders.