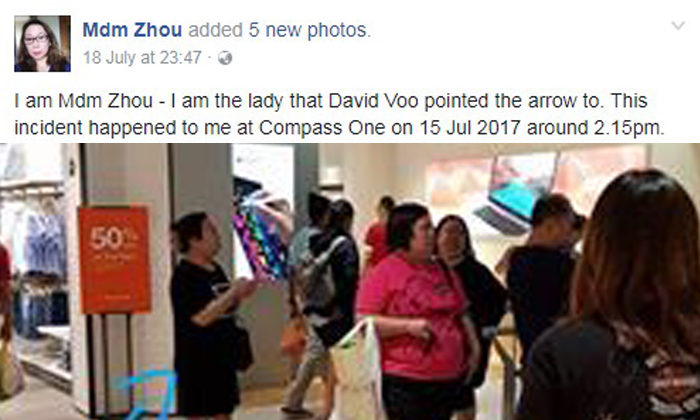 A woman tried to help a lost child whom she saw crying a Compass One shopping mall on July 15, but was wrongfully accused of trying to abduct the young girl by a witness instead.

The woman, Mdm Zhou, has since spoken out on Facebook to identify herself and clarify the events of that day. She has also lodged a police report.

This comes after the witness, David Voo, uploaded a Facebook post on July 15 about what he thought he saw and wrote "beware of this lady".

According to him, he saw the child's mother shouting out for her daughter. Curious, he decided to follow her and saw Mdm Zhou "holding" the little girl.

Voo said, "The next moment, the little girl was back with her mum and this lady looked lost and stood there like 'mission failed'."

His post, which has been removed, was accompanied by a photo of Mdm Zhou at the scene, with an arrow pointing at her.

In response to Voo, Mdm Zhou wrote in a Facebook post dated July 18 that, "The post online accused me of trying to abduct a little girl when I was only trying to help."

According to Mdm Zhou, she had been at Compass One for a facial and was accompanied by her daughter, when they "noticed a little girl alone and crying".

She recounted, "I walked towards the little girl, trying to comfort her for about 5 minutes.

"A few passers-by then asked me to bring her to the information counter and I was concerned about her safety, thinking that she could have been lost."

That was when the child's mother appeared and "shouted at the toddler by her name", said Mdm Zhou, who then returned the child to the mother.

She continued, "My intention was trying to help the helpless little girl to find her mum. Being a mother, I know the anxiety of the mum and child.

"David Voo accused me of being an abductor without finding out the truth. This post with my photo and arrow pointing at me has hurt me deeply.

"My neighbours and friends have approached me to ask me why I could be smeared in such a way, and I decided to lodge a police report."

Mdm Zhou called for netizens to "convince David Voo of my innocence" and said "he has spoilt my reputation".

"The experience is painful. I want him to remove the post immediately and apologise to me," she wrote in her post.

In turn, Voo commented on Mdm Zhou's post and said he has sent her a personal message to apologise for the misunderstanding.

He also wrote, "Sorry for the mistake I made. I didn't realise till I saw your post. I have already removed the post and I will be more careful in future."

In response to media queries by Stomp, the Police confirm that a report was lodged and investigations are ongoing.