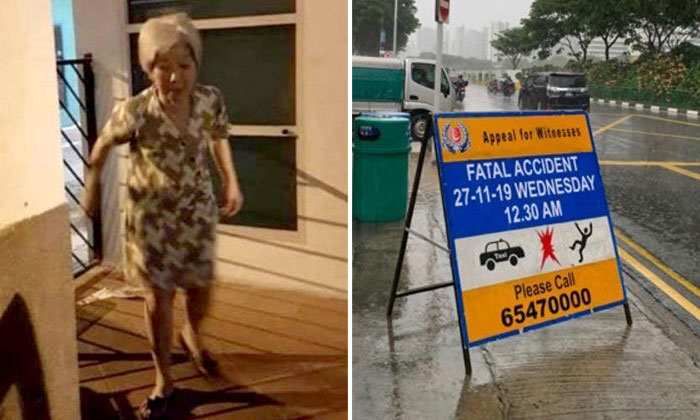 She was crossing the road aiming to catch the last bus home when she was hit and run over by a taxi.

Police told The New Paper yesterday that the accident occurred along Bukit Timah Road towards Woodlands Road at around 12.28am on Nov 27 and a 69-year-old cab driver had been arrested.

Police said investigations are ongoing, and Mr Richard Poh, 29, the youngest of Madam Tay's four children, is appealing for witnesses to come forward and help.

Mr Poh, who is studying in Melbourne, last saw his mother at lunch two years ago when he came back to Singapore for a short visit.

Upon receiving news of her passing, he scrambled to book the next available ticket to Singapore and arrived on the same day of the incident.

He said: "I was shell-shocked when I found out. I didn't get to spend enough time with her, my biggest regret is not being able to come back to take care of her after I graduate."

According to passers-by who reached out, two passengers almost immediately rushed out of the taxi after the collision to help Madam Tay, who was moaning in pain before losing unconscious.

ComfortDelGro's group chief corporate communications officer, Ms Tammy Tan, said it has reached out to the deceased's next of kin to assist them.

She added: "The hiring agreement of the cabby has also been terminated and we are assisting the Police in their investigations."