Woman, 60, visits mall to withdraw cash but ends up being sold $2,400 of beauty products 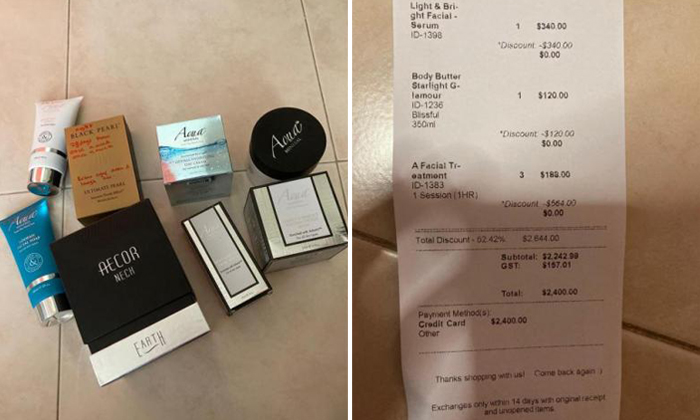 She went to Waterway Point to withdraw money ahead of Hari Raya Aidilfitri celebrations but ended up $2,400 poorer, after buying a few skincare products.

When Ms Nurhuda Halim's mother told her what had happened, the 23-year-old undergraduate was stunned.

Her 60-year-old mother, who had never used skincare products, had made four Nets transactions in two hours at the Aqua Mineral store after being offered various beauty care items by sales staff.

Speaking to The New Paper recently, Ms Nurhuda, who did not want to reveal her mother's name, said: "My mum said she was shocked at herself and did not know what had happened. It all started when she walked past the store and was asked to try some samples.

Among the products purchased was a wrinkle-reducer serum for $1,000 and a neck device worth $1,199.

Ms Nurhada went to the Aqua Mineral store at around 8pm that same night on May 6 to ask for a refund, but it was closed.

She then reported the incident to the Consumers Association of Singapore (Case).

In response to queries from TNP, an Aqua Mineral spokesman said it had issued a full refund on May 10.

"We learnt that a customer purchased a facial scrub from our store, and that she was recommended additional products for her eyes and neck by the customer service team after mentioning that those were areas of concern for her body," said the spokesman.

"We understand that the customer did initially agree to the products and purchased them by Nets, yet wished to receive a refund after reconsidering her purchase.

"We respect her decision and offer our sincere apologies for this experience. We believe that customer service is of utmost importance, and that maintaining good and strong relationships with our clients is key."

He revealed that the beauty industry was consistently among the top three industries in terms of customer complaints.

He said Case had received 408 pressure sales complaints last year and 108 complaints already from Jan 1 to April 30 this year.

Last September, an office cleaner, 63, was allegedly coerced into spending $13,180 on beauty products at a beauty salon in Suntec City.

The products were returned and the money was reimbursed three days later.

In a separate incident that same month, an 88-year-old retiree was charged $4,445 for a one-time facial treatment at a beauty spa at Tampines Interchange and ended up forking out $2,000.

The man was originally charged $20 for each of the alleged 220 oil bumps removed.

His grandson, who wanted to be known only as Mr Ho, said the elderly man did not receive a refund.

They were advised by Case to go to court, but they did not want to incur more costs.

Ms Nurhada said she had heard of such cases involving the elderly over the past few years.

She said: "My mother was devastated when it sunk in that she had spent so much money on things she did not need."

Relieved that Aqua Mineral had given a refund, she now often reminds her mother to consult the family before making any expensive purchases.

She said: "One should exercise caution as much as possible, and should they be in such a situation, they should call a family member or someone they trust."