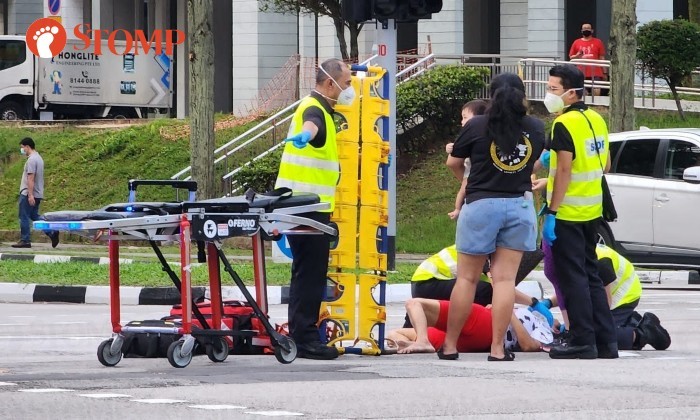 A 60-year-old woman was taken to hospital after an accident involving a personal mobility device (PMD) in Woodlands on Thursday (Sept 22), said police.

Sharing photos of the woman lying on the road at a pedestrian crossing, Stomper Johan said that the victim had wounds on her hands and feet, and was still conscious when the Singapore Civil Defence Force (SCDF) ambulance arrived.

"She just couldn't move from the position. People were standing there to protect her from the traffic," said the Stomper.

"The uncle who knocked her down was waiting at the junction until SCDF came and took his particulars."

The woman was taken to Khoo Teck Puat Hospital.

When contacted by Stomp, the police said they were alerted to an accident involving a PMD and two pedestrians.

A 61-year-old man is assisting with police investigations, which are ongoing.