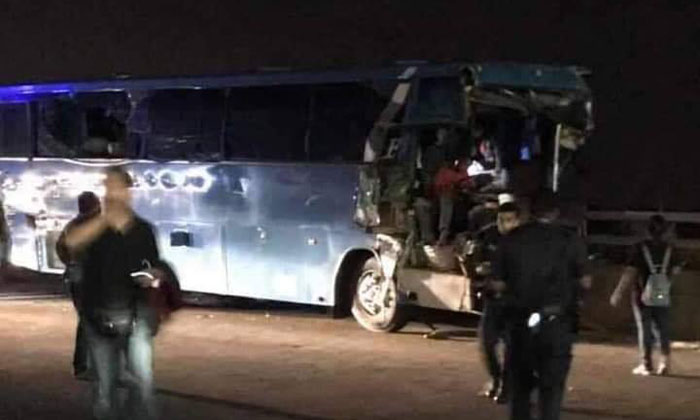 A 35-year-old woman travelling in a bus on the Second Link bridge towards Tuas Checkpoint died after the bus was involved in an accident in the early hours of Tuesday morning (Feb 26).

The 59-year-old bus driver was subsequently arrested for causing death by rash act, the police said in a statement.

According to the Singapore Civil Defence Force (SCDF), two women were found at the foot of the flyover.

"One of the women had sustained serious injuries, and the other was pronounced dead at the scene by an SCDF paramedic," it said in a statement.

Facebook user Deejay Nesh posted photos taken at the scene of the accident.

In one of the photos, the front of a bus is exposed after sustaining apparent damage.

One of the windows on the right side of the bus is smashed through.

SCDF responded to the accident at 501 Jalan Ahmad Ibrahim at about 4.25am.

"Upon arrival at the accident scene, SCDF observed a bus against the side railing of the flyover," SCDF said.

"The bus driver was trapped in his seat and had to be rescued by SCDF using hydraulic rescue equipment."

"The bus driver and 11 passengers were conveyed to Ng Teng Fong General Hospital and National University Hospital by SCDF ambulances.

"There were four other passengers assessed with minor injuries and they refused conveyance to the hospital."

In response to a Stomp media query, the police said they were alerted to the accident at 4.21am.

"A 35-year-old female bus passenger was pronounced dead by paramedics at scene," a spokesman said.

"The bus driver and 11 other bus passengers were conveyed to hospitals.

"The 59-year-old bus driver was subsequently arrested for causing death by rash act.

The accident also caused a major traffic jam at the checkpoint.

At 6.05am, the Immigration and Checkpoints Authority (ICA) said the accident was blocking the heavy vehicle lane.

Buses and lorries coming from Malaysia towards Singapore were unable to enter the checkpoint at arrival while departure traffic was affected due to buses and lorries being diverted back to Malaysia.

At 10am, the ICA said the heavy vehicle lane at Tuas Checkpoint was open again for arriving buses and lorries.