Woman, 33, taken to hospital after car skids and crashes into drain at Sembawang Road 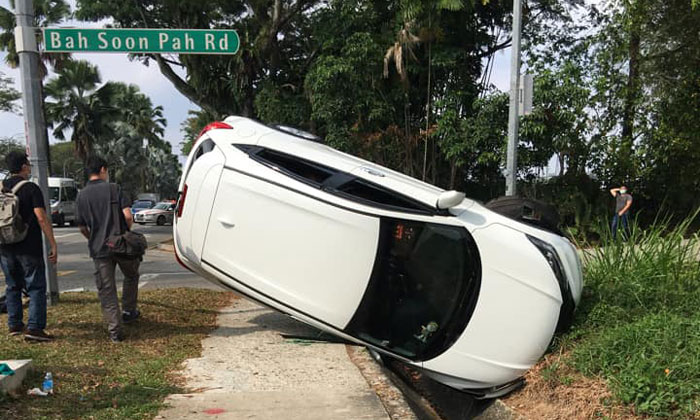 Submitted by Stomper Isaac, Someone

A 33-year-old woman was taken to hospital after the car she was driving skid and overturned at the junction of Sembawang Road and Bah Soon Pah Road on Thursday afternoon (Feb 25).

Stomper Isaac shared a video that he took while passing by the scene on a bus.

A white car can be seen flipped over and stuck in a drain.

A woman and a young girl can be seen sitting down nearby.

Stomper Someone alerted Stomp to a video posted on Facebook showing the aftermath. A commenter also shared a clearer photo of the car.

In the video, police officers are at the scene and motorists are seen avoiding the left-most lane.

In response to a Stomp query, the police said they were alerted to an accident involving a car that skidded at the said location at about 4pm.

Related Stories
12 hurt after accident between lorry and bus on PIE
68-year-old driver in Punggol accident dies in hospital after suspected heart attack
Probation for driver who struck cyclist while speeding, causing him to suffer severe brain injury
More About:
accident
overturn