Windshield shatters after double-decker bus crashes into shelter opposite VivoCity 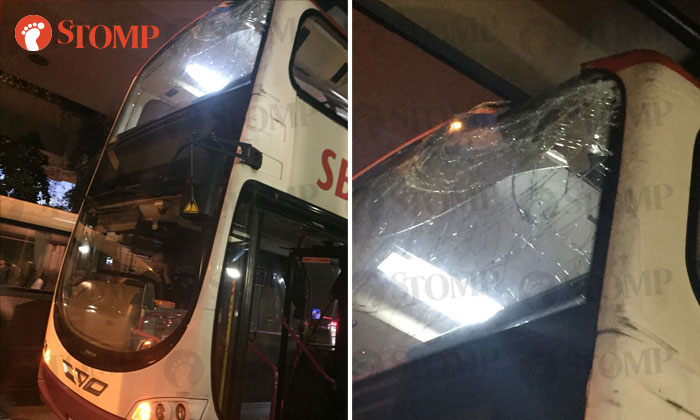 An double decker SBS Transit bus crashed into a shelter of a walkway opposite VivoCity yesterday (Oct 29) at around 7pm , shattering the windshield of the vehicle's upper deck.

Stomper Carol was on the second level of the vehicle when the accident happened.

In a telephone interview, she said that she felt strong vibrations as the bus hit the shelter.

The Stomper estimates that there were around 10 passengers on the upper deck when the accident took place and the crash left them shocked.

The bus captain subsequently told everyone to alight before making a call on his mobile phone.

Said a spokesman for the Singapore Civil Defence Force (SCDF) in response to a Stomp query:

"SCDF received a call for assistance at approximately 7.10pm.

"SCDF immediately dispatched one ambulance to Telok Blangah Road towards the city.

Ms Tammy Tan, senior vice-president of corporate communications for SBS Transit, has apologised for the accident.

"No one was injured in this incident and we are thankful for that. We apologise to all affected commuters and are assisting the police in their investigations."