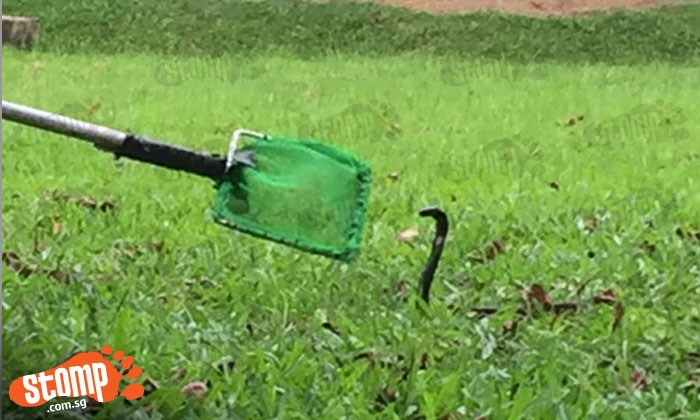 Stomper Chee Chiow sent in pictures of a king cobra he spotted along the Jurong Lake park connector.

He came across the sighting at around 9am, while exercising along the park connector opposite the Canadian International School.

The Stomper then immediately alerted NPark workers whom  he saw nearby.

NParks workers got into action, getting a net to catch the snake.

By the time they captured the reptile, a crowd had gathered around and suggested that the workers release it, which they agreed to.

While king cobras are known to avoid confrontation with humans when possible, they will attack if provoked. The species is capable of delivering a fatal bite and the victim might receive up to 7ml of venom, which may lead to cardiovascular collapse, or even death.

Snakes have been popping up in Singapore quite recently. This is not the first time such incidents have been brought to Stomp's attention.

Related Stories
These snakes thought they had a good meal -- only to get killed after eating their prey
3.6-metre snake found at Defu Lane -- and this fearless guy has no qualms about catching it
Huge and long snake sends residents into hiss-terics near Buangkok MRT station
snakes
wild
animals
park