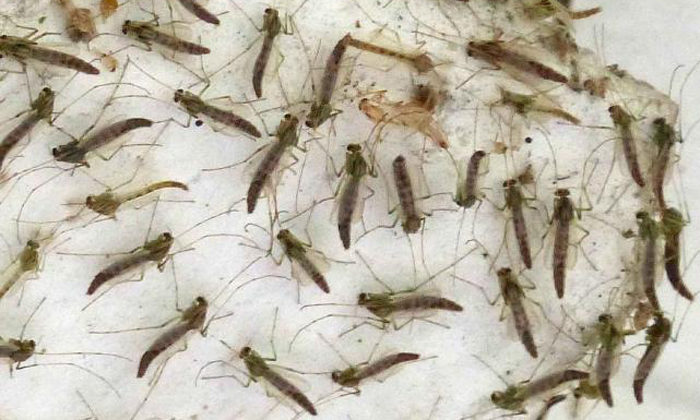 Residents at three blocks of flats in Pandan Gardens have been plagued by thousands of midges which are said to appear in swarms at night.

Residents in the affected blocks near Pandan Reservoir told Chinese daily Lianhe Wanbao in a report yesterday that they have been affected by the flying insects almost daily for a month now.

The midges are a nuisance to those living in blocks 411, 409 and 408, dropping into their food and even flying into some residents' noses.

Efforts to chase them away are futile, and it is impossible to kill them all, said some residents.

Chen Zhongbao, 50, who works in the funeral business, told Wanbao that the problem has been ongoing for a month.

"In the day, the midges fly about along the ceiling in the common corridor. But after 7pm, once the lights are on at home, they will fly in," said the Block 411 resident.

Housewife Weng Lizhen, 66, who lives on the 12th floor, said the bugs land on her face now and then, which she feels is unhygienic.

"Even though they do not bite, they frighten my grandson when he comes for a visit," she added.

Wanbao visited the flats and found dead midges littering the corridors, with more on lower floors.

A cleaner, who was sweeping away midges from the corridor ceiling, said he clears away the insects in the mornings but more appear later, with thousands gathered on the ceilings.

A spokesman for national water agency PUB told My Paper yesterday that it has observed a recent increase in Chironomid midges around the HDB blocks near Pandan Reservoir.

"PUB has been closely monitoring the situation and is carrying out measures such as fogging, misting and larvicide application at Pandan Reservoir," said the spokesman.

"Midges do not bite or spread diseases but are a nuisance when present in large numbers. PUB will step up the frequency of the measures to control the population."

According to a guide to non-biting midges on PUB's website, here are three tips for residents to minimise the nuisance: