Is this the Segar Rd monkey... or Spiderman? Watch it in action in this cool video 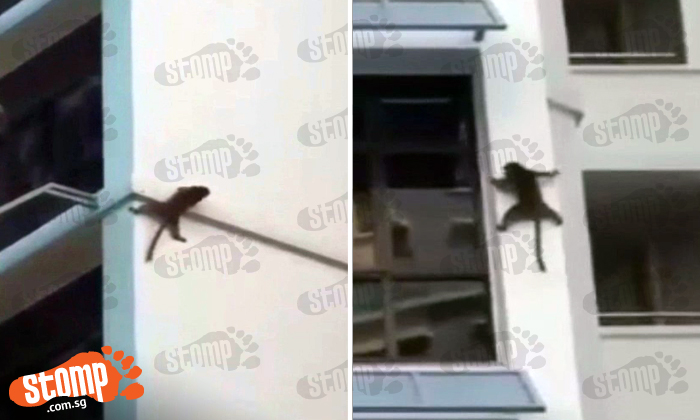 Spiderman, spiderman. Does whatever a spider can, goes the catchy song from the Spiderman cartoon series from the 60s.

Apparently the lyrics have rubbed off on this monkey at Segar Road that displayed some awesome moves while hopping around a block of flats there.

Stomper Vani spotted the monkey swinging about at the back of Block 472 at 10am on April 7.

"I was astonished at how much the monkey had learnt from "PETER PARKER/SPIDERMAN!", said the Stomper.

The incident comes to the spotlight after a recent spate of monkey attacks on Segar Road residents.

In March, Stomper Dave filmed a hungry monkey chasing after a woman at a playground at Block 471 Segar Road.

On April 10, Stomper Emmanuel stated how he is at the end of his wits with a monkey problem his family has been experiencing for the past three months.

The monkey would wreak havoc by breaking the potted plants in his balcony and making a mess.

An elderly man was sent to hospital after getting attacked by a monkey at the void deck of Block 472 in Segar Road on Apr 17.

Stomper Ruth's sister, who is staying on the 7th storey of Block 471 in Segar Road, was attacked by a monkey earlier that same day.

After receiving no less than five reports about a monkey terrorising residents at Segar Road in Bukit Panjang, the Stomp Team made a trip down to the area to speak to residents about what was going on.

Among them was Stomper Zenn, a resident of Block 468, who was the third victim of a monkey attack on Apr 18.

The recent spate of monkey attacks at Segar Road in Bukit Panjang are likely to be caused by a lone monkey, said the Agri-Food and Veterinary Authority of Singapore (AVA).

In a media statement released on Apr 20, AVA added that the monkey's aggressive behaviour is likely due to feeding, which has caused it to associate humans with food.

Stomper Kesavan spotted a group of people teaming up in an attempt to catch a "troublesome" monkey at Block 469 Segar Road this morning (Apr 20) at around 9am.

Two videos that he filmed show staff from the Animal Concerns Research and Education Society (ACRES) at the scene with various equipment.

No monkeys were caught during this operation.

Stomper Tan was at the void deck of Block 436 Fajar Road in Bukit Panjang at around 10.30am on Apr 21 when he spotted a monkey climbing on a fence around a gardening area.