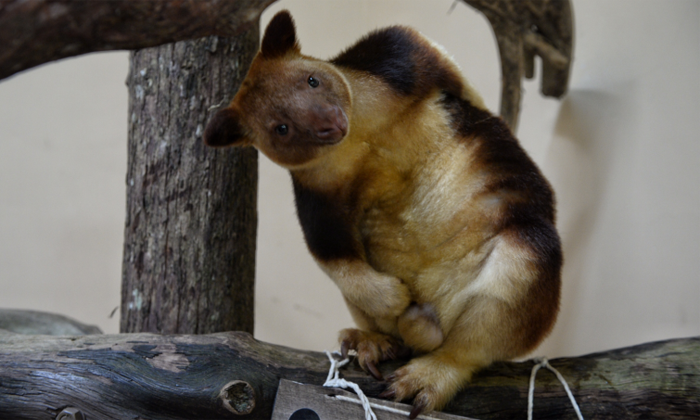 Orphaned at five weeks when a falling branch killed his mother, a "miracle" tree kangaroo that was later adopted by a wallaby has found a new home at the Singapore Zoo.

Makaia's move here in July from the Adelaide Zoo in Australia is part of a global plan to ensure the survival of his species, the endangered Goodfellow's tree kangaroo.

The two-year-old will be put together with a female, Nupela, in the hope that the pair will start their own furry family.

Brown with two golden stripes running down its back, the marsupial native to Papua New Guinea is one of only about 50 captive tree kangaroos found in zoos around the world.

Compared to land kangaroos, it has shorter limbs, making it stockier and clumsy on ground. But it has broader feet and can walk backwards, which makes it easier for it to traverse on treetop terrain.

The Goodfellow's tree kangaroo is classified as endangered under the International Union for the Conservation of Nature Red List of Threatened Species due to unsustainable hunting and loss of habitat. In the last 50 years, its population has declined by about half.

In November 2014, Makaia made headlines around the world when, at 47 days old, it was adopted by a yellow-footed wallaby after its mother died.

When it grew too big for the wallaby's pouch, Makaia - which means magic in a local Papua New Guinea language - was cared for by a keeper.

Visitors to the Singapore Zoo will be able to see Nupela in the park's Australasian Zone from Wednesday (Aug 3), while Makaia will be put into the exhibit later once it has settled into its new home.