AVA responds to dog found dead at foot of Block 480A Segar Rd: No evidence that it was thrown from height 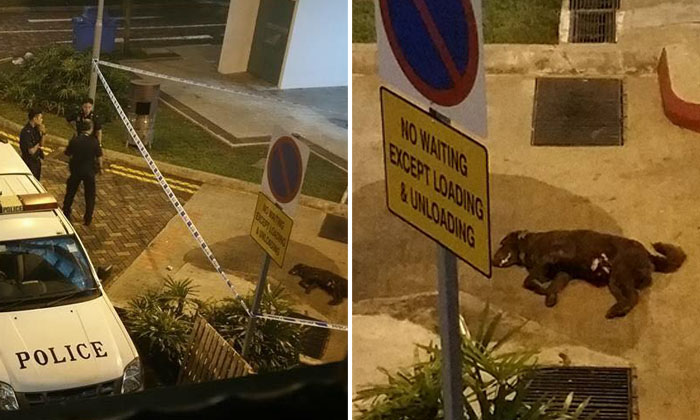 The Agri-Food and Veterinary Authority of Singapore (AVA) has responded to the incident where a dog was found dead at the foot of Block 480A Segar Road in Bukit Panjang in the wee hours of Thursday (Aug 25), stating there was no evidence it was thrown from height after carrying out investigations.

Stomper Karen alerted us to a Facebook post by Fidah Adnan in the group Lost and found pets in Singapore. According to the post, the canine's anguished cries were heard before its bloody carcass was found.

In the post dated Aug 25 at about 1am, Fidah wrote:

"I don't know what happened but I heard weird sounds.. and then a wailing half-alive dog.

"I looked out the window, and saw this. There were blood stains on the wood pallet near the no parking sign."

In the photos, police were seen at the scene, and they had cordoned off the area.

According to the Stomper, the dog reportedly fell from its owner's flat on the 9th storey. Blood was seen on the grass and a wooden pallet near its carcass.

A resident at the scene, Facebook user Kasthuri Bie, commented:

"My parents have seen the dog very playful and friendly.

"The owner said they take care of he dog like child and he jumped down when they forgot to close the windows."

Netizens, however, wondered if the dog really did jump down on his own as commenters claimed that dogs are 'smart'.

However, AVA responded that there was no evidence it was thrown down as netizens claimed.

"The identity of the owner was established and our investigations did not uncover any evidence indicating that the dog was thrown from height."

Related Stories
Poor dog chained up at Penjuru Rd factory daily for at least 3 years
Man in China gets beaten up for killing dog by dragging it behind his moving car
More About:
animal cruelty
animal abuse
death
dog
animals
AVA
official response