Wild dogs gang up on lone otter in canal showdown 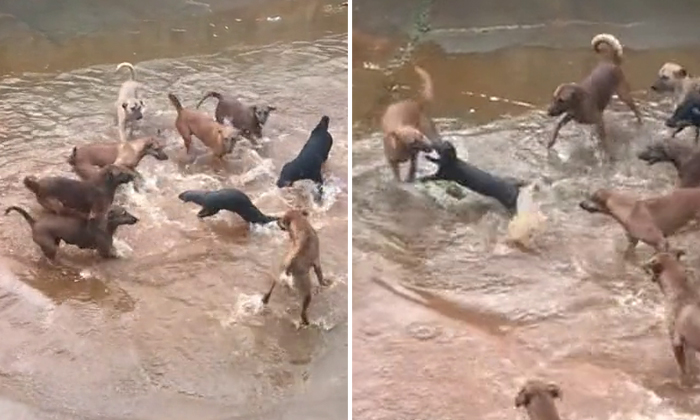 Perhaps envious of all the attention otters have been getting in Singapore recently, a pack of wild dogs spotted a lone otter and attempted to take a bite of it.

The 45-second clip of the showdown in a canal was uploaded on TikTok by user @wxn0103 on Jan 2.

Nine dogs circle the otter, barking at it and taking turns to bite it from the rear.

The otter initially fends off the dogs by turning in circles and lunging at the ones that get too close. However, a few dogs manage to bite the otter, causing it to recoil.

The dogs disperse only after a stone is thrown into the canal near the animals, presumably by onlookers.

The clip was shared on the Singapore Wildlife Sightings Facebook group, where some commenters expressed their frustration at the number of otters seen around the city state in recent times.

The video does not indicate the canal’s exact location.

Otters have been seemingly back in full force of late, integrating into urban spaces around the island – to the annoyance of some.

They have been visiting condominium pools, hunting for koi fish and drinking from fountains, and most notably attacked a British man at the Botanical Gardens, causing him to suffer more than 20 wounds.