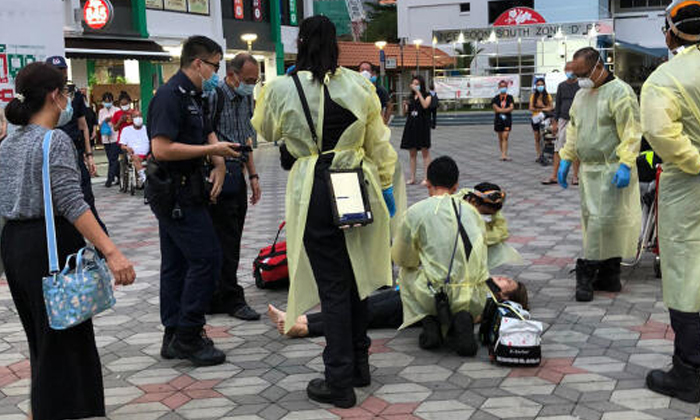 A wild boar that knocked a woman unconscious in Yishun was caught by National Parks Board (NParks) officers in Yishun Park on Sunday (March 20).

It has been “euthanised humanely for public safety”, said NParks in response to a query from The Straits Times (ST).

The park has been reopened to the public.

In a Facebook post on Monday, Minister of State for Home Affairs and National Development Muhammad Faishal Ibrahim said: “I am happy to update that Yishun Park has been reopened and residents are able to visit the park again.

"NParks officers trapped the wild boar on March 20 and are working to remove all the hoardings from the park.”

The woman was knocked unconscious by the animal at Block 846 Yishun Street 81 on March 9 at around 6.50pm.

Eyewitnesses told ST that the wild boar, which was "about the size of a dog", hit the glass storefront of a nearby optical shop after colliding with the woman, and then ran off.

The woman was taken to Khoo Teck Puat Hospital by paramedics.

The wild boar was last seen entering the forest in Yishun Park, which led to the closure of the park.

NParks officers tracked it and put up hoardings in the park to keep the public safe.

Associate Professor Faishal said that he has visited the woman who was knocked unconscious and that she was recovering well.

He added: "I would like to thank the residents for your understanding during this period, as well as NParks, and the town council for their hard work."

While Facebook users who commented on his post were supportive of the move to capture the boar, some Yishun residents ST asked were not.

Lawyer Carol Yuen, 25, said she was disappointed by the decision to euthanise the boar.

Ms Yuen said: “I don’t understand why the wild boar had to be caught and euthanised, just because it hurt a human.”

She added: “The fact that the authorities simply went for the convenient solution of euthanising the wild boar shows how little regard they have for nature and other animals coexisting with humans.”

Sales executive Alvin Soh, 29, said that the euthanisation of one boar did not solve the problem of the danger of wildlife spilling over into urban areas.

Mr Soh said: “The boar that was killed is just one of the many that will eventually find their way into the heartland of Khatib.”

However, he added that killing all the boars should not be the solution.

Local wildlife rescue group Acres’ co-chief executive Anbarasi Boopal also said that she was disappointed by the move to euthanise the boar, given that the boar was captured from a park area.