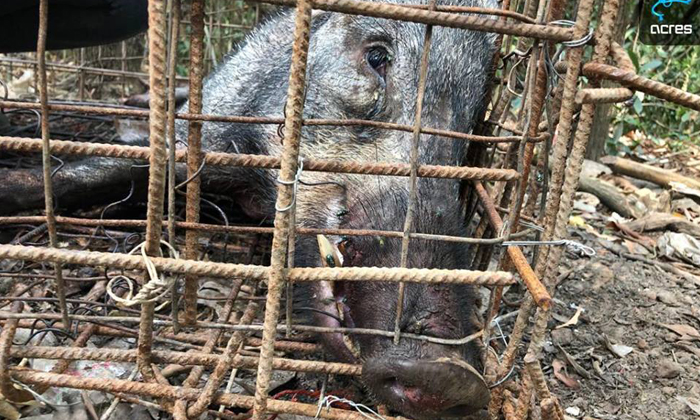 A wild boar was found dead on Monday (March 4) after getting caught in an illegal poaching trap at the Lim Chu Kang cemetery.

In a Facebook post, the Animal Concerns Research and Education Society (Acres) said the young male pig was dead when it arrived at the scene within 30 minutes of receiving a call.

According to Acres, a veterinarian’s assessment showed that the animal died from the stress of being trapped in a tight space.

"His hooves were heavily damaged from possibly trying to get out, which also caused severe bleeding," added Acres.

"He still had a metal spring in his mouth when found, which could have been where the bait was."

The huge trap is suspected to have been set up on-site using construction metal, wood and wires.

The Agri-Food and Veterinary Authority (AVA) and the National Parks Board, which also responded to the incident, are currently investigating.

Acres said: "The western catchment and cemetery grounds holds home for many wild animals such as the critically endangered Sunda pangolins, in addition to many species of birds, insects, snakes, turtles and amphibians.

"If one could set up such a huge trap on-site for a wild boar, many concerns arise for the other wildlife who live in these habitats."

As Singapore's wildlife is not restricted to nature reserves, with them constantly exploring and inhabiting green pockets including military training areas, the protection of wildlife outside nature reserves is vital to our biodiversity.

In October 2018, a family of five wild boars were found trapped in a cage along Sime Road.

They were seen trampling over each other and bashing against the cage in distress.

The group was eventually rescued and released back into the wild.