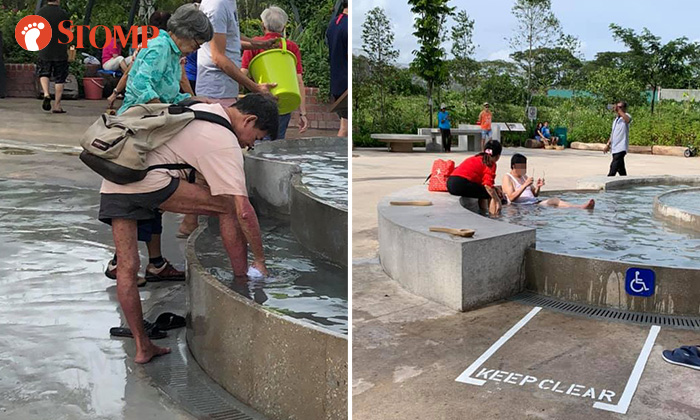 Many have been flocking to Sembawang Hot Spring Park ever since it reopened this year.

While visitors ought to abide by certain rules while enjoying the facilities, some people have shown we can't always have nice things.

A Stomper contributed a photo of a man directly placing his feet into a hot spring pool. 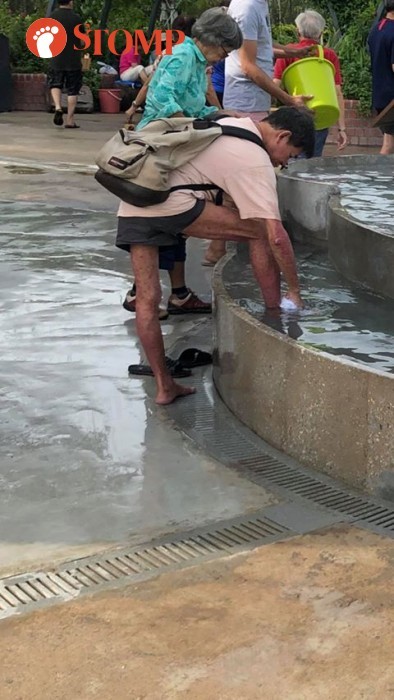 He said: "I got this picture from my friend. This was just a few days ago at the hot spring park."

In two other photos circulating on social media, a man can be seen soaking his entire body in the communal foot bath area while the other photo shows people washing their feet.

According to Lianhe Wanbao, the former was using water from the hot spring to clean his spectacles too. When people saw him lying in the hot spring, they immediately got up and left.

Facebook user Ryan shared the photo and said no one would be able to know if he were to urinate in the hot spring.

A netizen commented that no one would dare to cook eggs in the water and suggested that a notice should be put up to guide visitors on what they shouldn't do.

Blogger Petunia Lee visited the hot spring park and was shocked when she saw a domestic worker washing the feet of two people.

Lee said: "Simply because we pay them does not give us the licence to disrespect them to this extent."

Instead of pouring water onto their feet over a drain, people sat on benches beside the pool and placed their feet directly into the water after removing their footwear.

Xu Liren said in an interview that she often saw people walking into the pools with their slippers on.

"This is a public pool. Our feet are very dirty so we should all wash our feet before entering the water."

Shin Min Daily News reported that a woman hadn't seen anyone use soap to wash their feet before entering the pools.

The woman shared that since there aren't any disinfectants in the water, she would never place her feet in the foot communal bath.

She said: "If the water's temperature is soothing for our feet, I'm sure that it's also a suitable temperature for bacteria to breed."

Related Stories
Nice weather recently, but that doesn't mean you should dry your underwear at fitness corner
Punggol resident forced to close windows due to human poo at staircase landing
Man disappointed as teens puff away in Keat Hong Park: 'It's prohibited!'
More About:
inconsiderate
unhygienic
sembawang