Why so inconsiderate? Receipts found strewn all over the floor at Woodlands MRT station 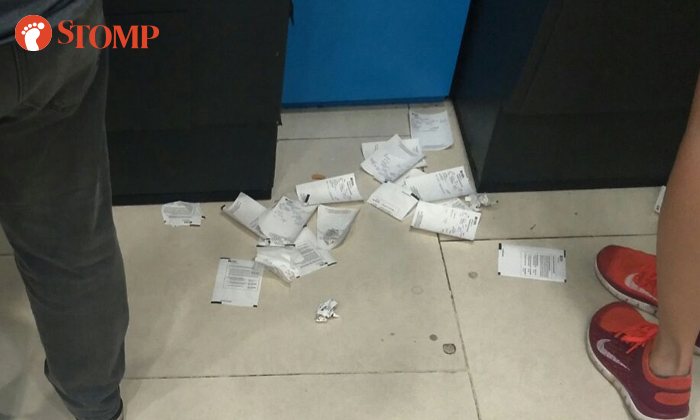 Receipts being strewn all over the floor around POSB ATM machines in Woodlands MRT station is said to be an everyday occurrence, according to Stomper Priscilla.

On Jan 16, she sent in photos of the litter to Stomp. One of the photos that she sent shows receipts on the floor next to people using the ATMs.

Another photo shows a pile of receipts on top of a blue box, which Priscilla says is not a dustbin.

There is in fact, no dustbin in the area itself, which might be why people litter there.

"This happens every day and this is already very mild. Sometimes when I go to withdraw money, it's literally like you're walking on receipts," she told Stomp.

"It really is an eyesore," said the Stomper, adding that she has not seen any cleaners clearing the litter in the area.

She said that the littering of the receipts may also pose a potential privacy issue, given that bank account numbers and balances are stated on the receipts.

"You know with all these scams going around... What if a loanshark transfers money into your bank account?" said Priscilla.

She hopes that people would be more mindful of the environment, adding, "People can always put their receipts in their bag first before throwing it later."

Related Stories
Someone has taken littering to new levels at Yishun Street 61
Resident advised to remove laundry at Anchorvale Link staircase by Town Council
Residents of Blk 350 Anchorvale Rd, this is not how you dump your rubbish and bulky items
More About:
woodlands
inconsiderate
litter