Why jaywalk and nearly get hit by car when the zebra crossing is just seconds away? 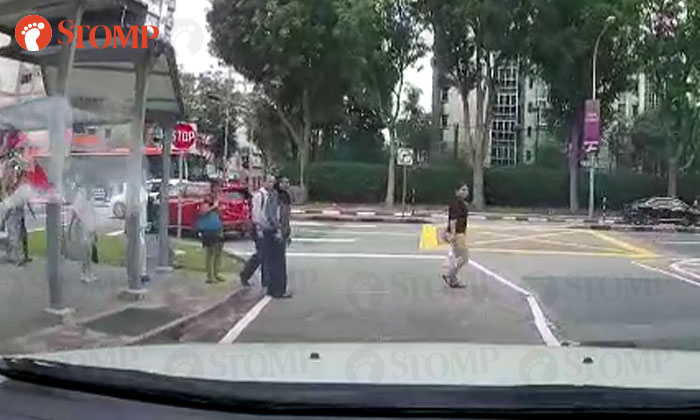 A pedestrian was caught on camera jaywalking while others had the intention of doing so along Simei Street 5 today (Oct 16) at 7.46am even though a zebra crossing was nearby.

Stomper Manoj was driving into the main road when he recorded what happened with his dashboard camera.

In the video, his car can first be seen going past the zebra crossing.

As he was approaching Simei Street 5, a female pedestrian jaywalked across the front his car.

Several others also planned to do the same based on their body language, but stopped as they saw Manoj's car.

In a telephone interview, the Stomper, who is staying in the area, said that this goes on almost every day.

He told Stomp that the zebra crossing had been demarcated roughly one month ago around five metres from the exit of the slip road.

Judging by the video, however, it seems like it has not achieved its intended result.

Manoj feels that some of the jaywalkers have a false sense of entitlement and assume that drivers have to stop their vehicles for them, even though this is clearly not the case.

Related Stories
Man behaves like hooligan, taunts driver after getting honked at for jaywalking in Bedok
Man with baby crosses road carelessly like he owns it, rages at driver who shook head at him
Woman dashes in front of vehicle just as driver was about to accelerate
More About:
jaywalking
dangerous