Why is this man pushing and toppling bikes at a multi-storey carpark? 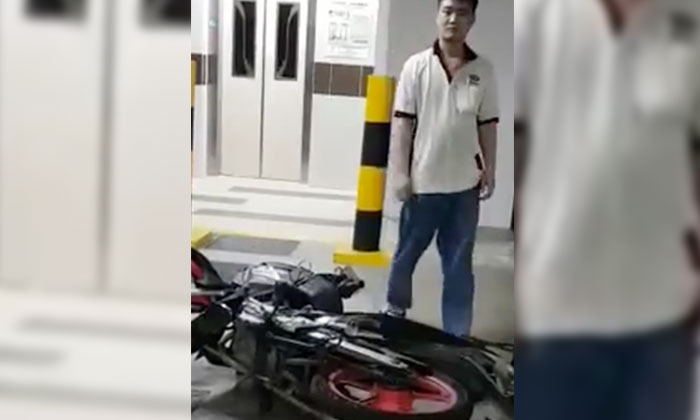 A video of a man getting confronted by passersby after allegedly toppling several motorcycles at a multi-story parking lot has been circulating on Facebook.

In the video shared by Facebook user Johney Krenteng, the man, sporting a white shirt with black collars, could be seen standing next to some motorcycles which have fallen on the ground.

A passerby, supposedly the same person taking the video, asks him why he had toppled the motorcycles.

The man ignores him and starts pushing a fallen motorcycle to its upright position,

The passerby asks him if this was his bike, to which he gives a barely audible grunt.

Unconvinced, the passerby pressed on; asking the man if another fallen motorcycle a few feet away was his as well.

“Then is that your motorbike?

During the process, the man starts pushing away the motorcycle.

The two were approached by other passersby who asked the first passerby what had happened.

The first passerby replied that the man had ‘dropped all the motorcycles’.

The man returns to grab something off the ground and tosses it next to the motorbike that he was pushing, which had fallen on the ground again.

He then gestures at the passersby.

One of the newly arrived passersby asked the man repeatedly if the motorcycle that he was holding belonged to him.

The man then uttered, ‘yar’ but said no further.

The first passerby shouts at the man, demanding to know if it was indeed really his motorcycle.

He points at the other fallen vehicles and presses further:

“So is that your motorbike?

“That one (too, is that) your motorbike?

“Why (did) you push everything down?

The video then pans around the carpark, showing several fallen motorcycles in the carpark.

A passerby then said that he thinks that the motorcycle that the man was holding on to was not his.

The others shared his sentiment.

The video then ends abruptly.

It is unknown when and where the incident happened.

The caption also alleges that the man in white was drunk.

Related Stories
Driver hurls vulgarities at woman and repeatedly kicks her car in road rage
Cabby rages at private hire driver at Changi Airport: "I will send this video to LTA!"
Ah pek throws chairs and glass bottles in dispute with beer lady and patrons
More About:
dispute
carpark
motorcycle