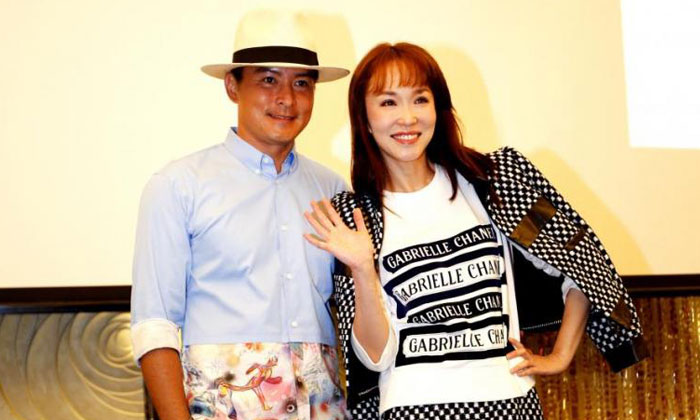 The pair play lovers in both Channel 8 drama Doppelganger, which will premiere on March 13 next year, and Chinese thriller film Yi Nian, which is slated to open at the end of the year.

While they had already made up their minds not to play an on-screen couple in projects after getting married in 2009, Lee, 45, said they became curious and wanted to see how married life and parenthood had impacted them as actors.

They have a three-year-old son, Zed.

In Doppelganger, Lee plays a troubled stockbroker who takes over the identity of his lookalike after the latter's death. Wong, 46, portrays the wife of the dead man.

"He will have a lot of affairs in the drama, so I will constantly throw ideas for intimate scenes to the crew," she told The New Paper with a laugh, at Doppelganger's lensing ceremony yesterday.

Lee added that during the drama's imaging session, there was a scene that required him to teach wealthy women how to swim. Wong kept insisting that he had a six-pack and encouraged him to strip.

"But I said no, because an instructor needs to wear a wetsuit to look like one.

"She wouldn't relent and just kept going on and on about how I love to remove my clothes for people to see. That's my wife for you," he joked.

However, when it comes to Zed, Wong takes things seriously.

She said that she was persuaded by Lee to take up Yi Nian and when they were shooting in China, their boy - who remained in Singapore and was looked after by Wong's mum - fell sick and was admitted to hospital.

"I was so worried that I flew back and forth so that I could juggle both commitments."

As the more relaxed parent, Lee said: "I told her that our son is slightly older so he can be a bit more independent. But when we were filming halfway, Fann was really not used to (his absence) and I had to keep counselling her during that period."