Why are there 2 empty coffins floating in Kallang River? 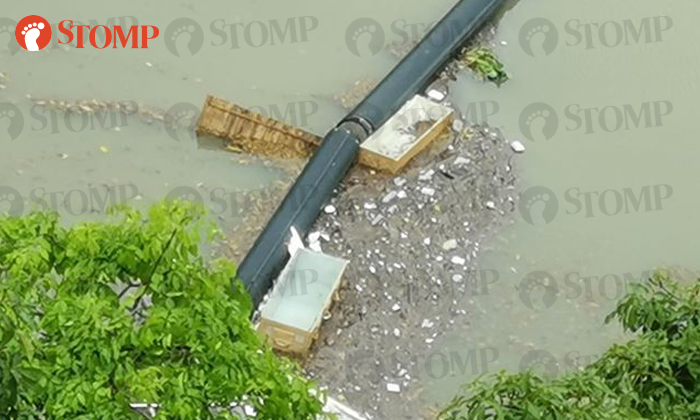 Two coffins were spotted floating in Kallang River on Wednesday (May 8).

Stomper J came across the unusual sight in front of Block 12 Upper Boon Keng Road at around 1.30pm and contributed a photo to Stomp.

He said: "I was working in the area at that time and was shocked to see it as I don't think this has happened in Singapore before.

"Police officers were at the scene and a boat activated to reach the site where the coffins were, probably to remove them."

According to The Straits Times, the empty coffins are believed to have been used to repatriate bodies to Singapore.

It is unclear how the two coffins ended up in the river, which is channelled to water treatment plants.

Funeral director Jackie Lee from Lee Teoh Heng Undertaker told ST that the coffins were most likely imported and were not properly disposed of after the bodies were dealt with.

"Whoever dumped the coffins into the river has no morals," he added. "After dealing with the bodies, we will always tear apart the coffins before properly disposing of them."

Mr Lee, who has dealt with imported coffins, said it should not be difficult to trace whoever is responsible for them as the attached shipping labels can be seen in photos of the coffins.

Related Stories
Heads up! Woman gets a fright after seeing THIS hanging out of window at Jurong West
You'll be amused to see what's hitching a ride on this car along Orchard Boulevard
This smiling banana soft toy on train is really 'a-peeling' to commuters
More About:
unusual
unusual sight