Whoever did this must have a screw loose 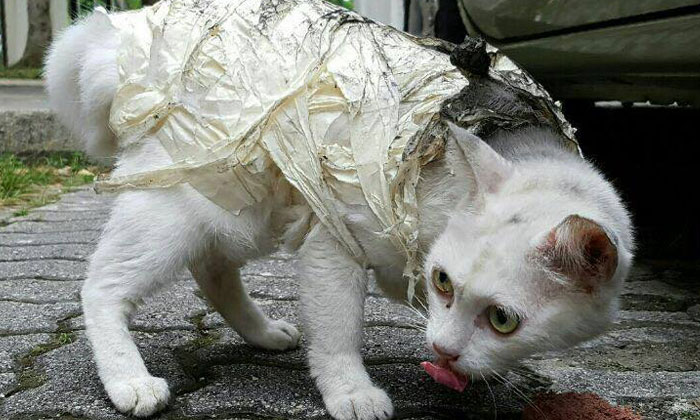 A cat was found walking around in Ubi last week wrapped in a "tight armour of masking tape" in what is believed to the first case of its kind here.

Though animal abuse is not all that rare in Singapore, the unusual nature of Jon Snow's case has sparked some attention online.

The plight of the white feline, named after the character in fantasy drama series Games Of Thrones, was first brought to light by cat interest group Yishun 326 Tabby Cat on Feb 1.

Photos of the cat - its body wrapped up tightly in the tape - were shared on Facebook, with the group initially speculating that it had been caught in a glue trap.

The trap is a controversial method to ensnare small animals such as rodents. In an update the following day, the group said Jon Snow was taken to the Mount Pleasant Veterinary Group to have the tape removed.

The tape around the cat was so tight that Jon Snow had to to be sedated before the vet, Dr Tricia Ling, could remove it.

In a Facebook video that showed the process, Mount Pleasant Veterinary Group thanked the cat's rescuers.

"For every abuser who hurts our animals, there are many who rescue and love them." it wrote.

"Initially, rescuers thought Jon Snow might have stepped onto a glue trap. But actually this seems worse. Because she could have stood there, trustingly, while her abusers taped her up."