While you were sleeping: Fire involving PMD battery breaks out in flat at Upper Boon Keng Road 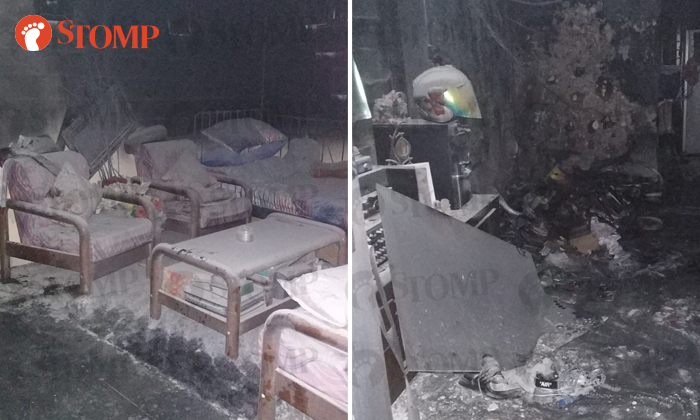 A fire broke out in a fifth-floor unit at Block 19 Upper Boon Keng Road during the early hours of Tuesday (July 9).

Responding to a Stomp query, the Singapore Civil Defence Force (SCDF) said it was alerted to the fire involving the contents of a living room at around 2.55am.

The fire was extinguished using two compressed air foam backpacks by the SCDF.

According to the SCDF, preliminary investigations show that the fire originated from the electrical battery of a personal mobility device (PMD).

Stomper Anonymous, a friend of the flat's occupant, shared photos of the fire's aftermath.

The photos show the flat's charred walls and ceiling. Ashes and soot can also be seen.

Anonymous said: "My friend was sleeping in the living room while his mother slept in the bedroom.

"Suddenly, he smelt smoke and felt heat. When he woke up, he saw that half of the living room on the left side was on fire.

"He took his mother out of the bedroom and they evacuated from the flat.

"My friend said that his PMD had caught fire but it was not being charged at the time of the incident.

"The sofa, television set, and hi-fi system were all damaged in the fire.

"A few of us came over to help clean up the following day."

Here are some safety tips for the prevention of fires involving PMDs, issued by the SCDF after a similar fire broke out in Tampines on July 3: