Wheelchair user reaches out to motorists in middle of Birch Road, allegedly to ask for donations 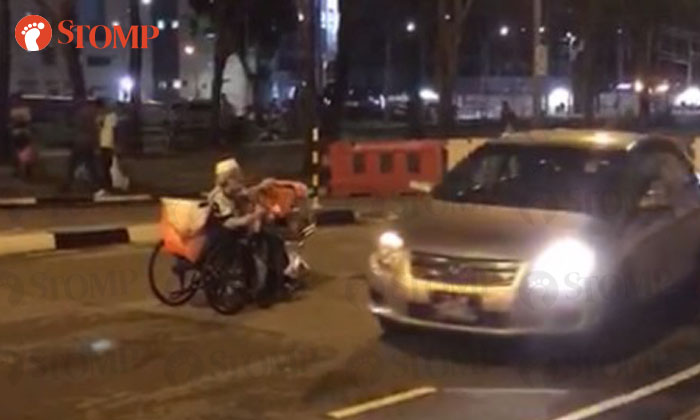 A wheelchair user was seen navigating dangerously in the middle of Birch Road, allegedly asking passing motorists for donations.

Stomper Ray sent in a video of the incident to Stomp taken on Dec 2, at about 10pm.

Ray was headed towards Farrer Park MRT Station, which is close by, when he saw the man facing oncoming traffic.

The video shows several vehicles passing by the man on the wheelchair.

The man also appears to have a trolley with him and seems to be using his legs to push him forward.

The video shows a silver car trying to make a U-turn.

However, the man does not move and the car driver has to manoeuvre around him.

Ray, who frequents the area every weekend, told Stomp that this was not the first time he has seen the man in the middle of the road.

He said: "I come here almost every weekend and I think I first saw him a few months back.

"He mainly asks for donations from foreign workers and tourists.

"He would tug on their sleeves to ask them for the money."

According to Ray, the man also allegedly asks for donations at the entrance of Farrer Park MRT Station and at Connexion, a building nearby.

"I never dared to approach the man, but he looks like he is in his 60s.

"He pushes himself with his feet and he seems quite agile for a person who is supposedly wheelchair-bound."

Related Stories
Youths allegedly ask for donations of up to $150, follow students to ATM if they don't have cash
Police investigating 4 youths who allegedly sought donations for 'ex-convicts' without licence
S'pore student tries to crowdfund $21k for masters -- but netizens say there are more worthy causes
More About:
donations
dangerous
reckless