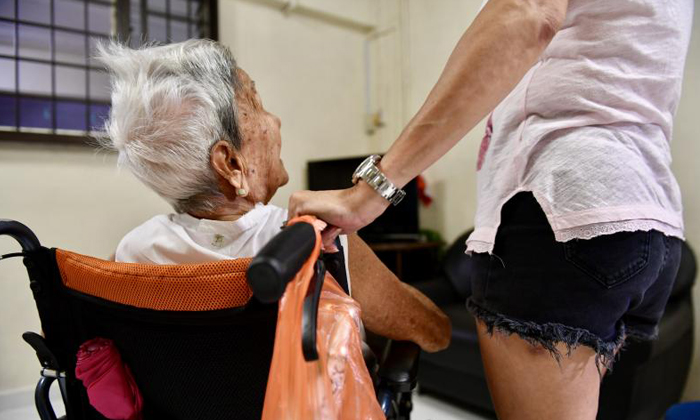 A 95-year-old woman in a wheelchair was kept waiting at a void deck in Hougang Avenue 8 for six hours, following a dispute about who she was supposed to be living with.

According to Shin Min Daily News, the elderly woman was with a domestic helper.

The elderly woman's daughter, Mdm Shen, said her mother suffered a hip injury after a fall more than one year ago.

As such, the elderly woman has to spend long periods of time on bed and can only move around with the help of a wheelchair.

"My mother has been living with my eldest sister for about 20 years. My niece helps to care for her too," said the 52-year-old housewife.

"However in the past two or three years, my mother has been bad-tempered. She often scolds and hits my niece. On April 16 at around 8pm, my mother not only scolded the maid, but also kicked [her]. It's worrying."

According to Mdm Shen, she tried to understand the situation from her mother and discovered the latter's desire to move out.

She added: "My mother said she wanted to stay at my older brother's house. Therefore, we arranged for her to go over that night. My brother and his wife also said they would take care of her properly.

"However, two days later, they unexpectedly sent my mother back to my eldest sister's place.

As her mother was still 'throwing a tantrum', Mdm Shen and her niece discussed the matter. They decided to send the elderly woman back to her brother's house.

Mdm Shen told Shin Min: "At 11am that day, we were driving to my brother's home. My mother and the maid sat at the void deck and were waiting to go upstairs.

"I realised that my sister-in-law was returning from buying food and was trying to avoid us from a distance. Afterwards, when my niece discovered her, she left my mother in my sister-in-law's care and left.

Mdm Shen said she later received a call from her second brother, asking her to come and pick up their mother.

That was when she realised her mother and the maid had been sitting at the void deck the whole time.

"The two of them had been waiting downstairs for six hours just like that. It made us feel really angry. My brother and his wife had actually not allowed my mother into their home!"

Refuting the allegations, sister-in-law Mdm Zhang said Mdm Shen was the one who repeatedly sent the elderly woman over and left the latter to her own devices.

Mdm Zhang, a 62-year-old housewife said: "My mother-in-law did not even want to move out. It was said that she would only be temporarily staying with us for a few days.

"It was Mdm Shen who left her mother downstairs without a care. She did not hand her mother over to us and simply left on her own with her niece."

Related Stories
Granny delivers meals to shut-in daughter daily for 3 years, gets shut outside unit for 3 hours
MSF and HDB respond to “false allegations” made by woman whose family lives at Changi Airport
83-year-old wheelchair-bound widow found with face full of blood at broken teeth at Bedok church
More About:
dispute
family
elderly