What's up croc? Crocodile caught near Penang market, another still at large 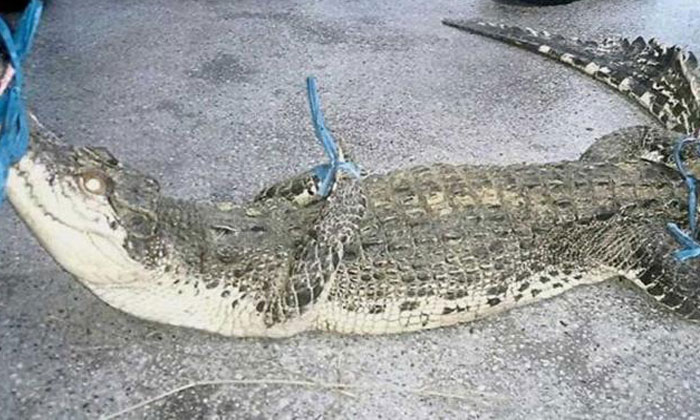 A saltwater crocodile has been caught near the Jelutong market, days after a similar reptile was spotted on mainland Penang.

It is believed to have been bred in captivity and could have escaped from its owner.

Several traders spotted the reptile, which is about 1m long and weighs 10kg, at a vegetable stall in Ipoh Lane behind the market at about 6.30am yesterday.

The Fire and Rescue Department was alerted but its personnel were told that it was a monitor lizard on the loose.

Perak Road fire station chief Yamin Tekor said it received the call from a member of the public.

When his men reached the spot at about 7.10am, they found a crocodile there.

The firemen handed the reptile to the Penang Wildlife and National Parks Department (Perhilitan).

"We believe it was bred as a pet and escaped, but it could have come from the nearby Jelutong River through a series of drains," Yamin said.

"The skin from this type of crocodile is used to make leather goods."

He also believes that it could have been a pet which escaped or whose owner released it after it grew big and became difficult to handle.

Dr Shahrul said the reptile was about two years old based on its size.

Meanwhile, efforts to trap a 2m to 3m long crocodile, spotted on a bund beside the Mati River at Kampung Kubu in Penanti on mainland Penang, have been futile.

Perhilitan placed two metal cages with chicken as bait beside the river since Monday but failed to catch the reptile which was earlier spotted by villagers there on three consecutive days.

The cages, which were camouflaged with leaves, only trapped two monitor lizards.

"It could have fled from the Kubu River, about 500m upstream, during river cleaning works at the end of last year because there have been sightings of a similar looking crocodile there.