What does this man need with his "extended modified bike"? 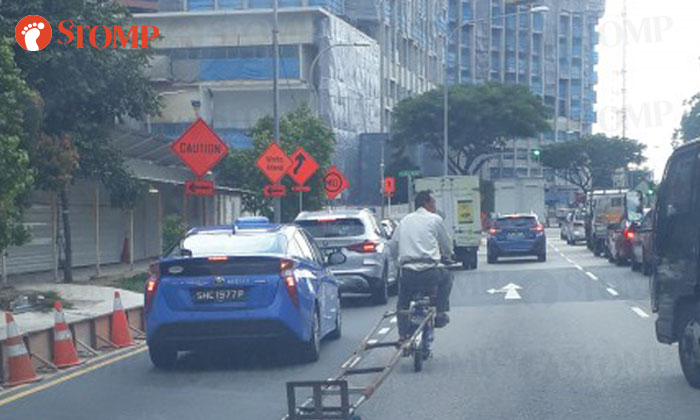 Submitted by Stomper Mr B

A man was seen riding a modified extended bicycle along Paya Lebar Road yesterday (Oct 25) at about 1pm.

Stomper Mr B and his wife were in his car driving towards City Plaza, when his wife saw the man.

She snapped a photo of the cyclist and sent it to Stomp.

In the picture, a long metallic structure is attached to the back of the bike.

Mr B said: "I think it is a danger to other motorists as the extended portion, which is easily two to three metres, is quite low, and may not be visible to vehicles driving near him."

Their caption said the man cycling in the video is the same man who used an extended e-scooter last week, which was confiscated by the Land Transport Authorities (LTA).

"We are posting to highlight so that drivers and others will be on the lookout for this uncle delivering long metal bars around Paya Lebar, Upper Paya Lebar, Ubi area and Geylang area," the caption added.

Related Stories
How many objects can you hang at the back of a lorry?
'Green Goblin' at Marina Bay? This hoverboard is faster than your regular mode of transport
Man climbs on roof of sheltered walkway at Bukit Panjang, runs on it and waves at onlookers
More About:
bicycle
unusual