"What are the benefits of PMDs with all these accidents?:" Stomper who nearly got hit by e-bike 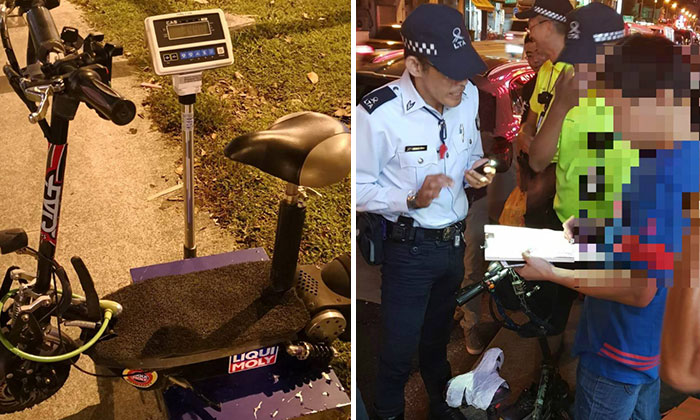 Stomper Janice was on her way home back from the market about one and a half months ago when she was nearly hit by some e-bike rider moving at a fast speed near a bus stop.

Sharing her views with Stomp via a phone interview, Janice lamented:

"I just alighted a bus at a bus stop along Pasir Ris Street 11.

"I placed my groceries on a seat so can I adjust them before crossing the road.

"When I turned around, an e-bike rider just zipped past me. If I had taken just one more step, I would have gotten hit.

"They rode off at high speed and I was carrying marketing bags. I didn't have time to catch them on video.

"l often meet such inconsiderate inexperienced users of PMDs when I am alighting buses or using the overhead bridge."

"I once asked a youth at traffic light crossing outside White Sands Shopping Centre if he rings his bell to warn pedestrians when he is riding. He said he did not have a bell but he has his beam light on to alert others.

"Pedestrians will be focusing on traffic light change and not on the road, so it'll be hard for them to tell if a PMD user is nearby."

Moreover, Janice added that these beam lights are only used when e-scooters travel at night.

"So there are virtually no warnings; bell or light in the daytime," she added.

The lack of warning combined with the fast speed the e-scooter riders travel at poses a constant danger to pedestrians of all ages, said Janice.

Even the riders themselves are not safe.

Janice added that the riders are often victims in accidents, such as an 86-year-old e-scooter rider who was injured after an accident with a bus in April.

In other instance, an e-bike rider and his pillion rider were injured after an accident with a van in December last year.

She argued that victims are often elderly folks or children -- the society's most vulnerable.

"Even if the victim is an adult, this could impact his entire family if he is the breadwinner.

"His children who are still schooling will be affected as well if the family has no income."

"In my opinion, it is best to ban such PMDs as I do not see any benefits.

"They do not lighten public transport to any effect.

"What are the benefits of PMDs with all these accidents?"

Janice's experience comes at a time where accidents involving PMDs are common occurrences.

Just this Tuesday (June 5), a former beauty queen suffered injuries after getting hit by an e-scooter at the Bishan-Ang Mo Kio Park.

Several Stompers also alerted Stomp to incidents where errant users of PMDs ride on the roads, an offence under the Road Traffic Act.

The incident comes even as the Land Transport Authority strengthened its measures against the errant use PMDs, including the Active Mobility Act which regulates the sale and use of bicycles, PMDs, and power-assisted bicycles (PABs), reports The Straits Times.

According to a Facebook post by the LTA, 322 errant users have been caught in operations across Singapore, in areas such as Bedok Reservoir, Geylang, Kaki Bukit and Jurong, more than one month since the implementation of the new rules.

LTA said that the errant users committed offences such as “riding on-compliant devices on public paths and roads, using their PMDs or PABs on the wrong paths or roads, and speeding or riding recklessly on paths”.

During the operations, 292 devices were seized and impounded, including a 92kg e-scooter which is four times above the maximum weight of 20kg stated by the LTA.

The agency also said that the cases are pending investigation, and if the users are found guilty, will be liable to strict penalties of heavy fines and/or imprisonment.

For the current guidelines on bicycles, PABs, and PMDs, refer to the diagram below.

What are your views on the matter? Do hit us up at stomp@stomp.com.sg to tell us.