What a close shave! Watch as bat fights off snake's death grip in epic battle for survival in Thailand 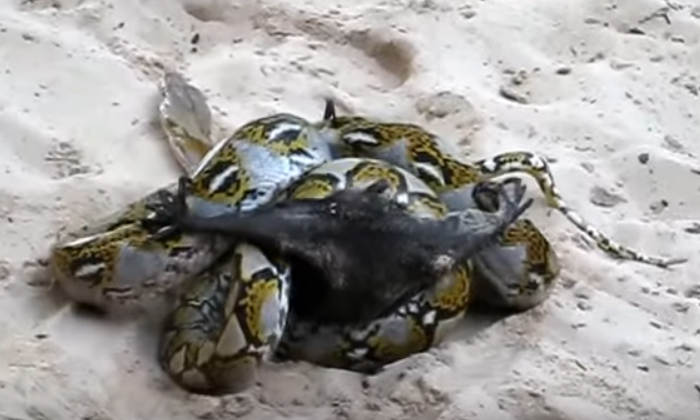 It is not everyday that you get to see a bat and a snake lock in an epic battle for survival.

In The Lad Bible's video below, the snake is seen wrapping its entire body around the flying fox bat, almost squeezing the poor bat to death.

But, somehow, the fight took an unexpected twist, and the fruit bat managed to fight back and wriggle free using its wings and claws to stab at the snake's scales.

The bat then manages to crawl away from the reptile.

In the background, onlookers can be heard gasping as they watch from a beach in the Similan Islands in Thailand.

"The bat is biting him!"

"Oh my gosh. I feel sorry for it," another added.

It is not known whether the bat managed to survive as it was last seen crawling desperately through the sand, using its wings to drag itself out of harm's way.

Related Stories
These snakes thought they had a good meal -- only to get killed after eating their prey
Students in Malaysia cry and scream as trainer throws snake into muddy pit with them
Oh snap! 200 cobras escape from illegal breeding farm in Nanjing
snakes
Epic
fight
scary