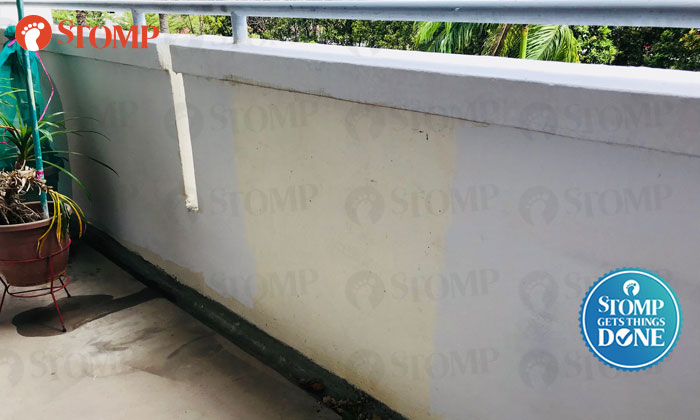 West Coast Town Council is taking action against a contractor that was engaged to do paint work at Block 701 West Coast Road.

She shared photos where patches on some walls were left unpainted.

She described the paint job as "shoddy workmanship".

"The painting contractor did not request residents to move the items to make way for painting and they just painted the area avoiding plants, flower pots, planter racks and even a notice pasted on one of the walls," she said.

"Can you accept such quality?" she asked.

In response to a Stomp media query, a spokesman from West Coast Town Council said that they received feedback from the Stomper on Mar 27.

"Upon receiving her feedback, we have convened a meeting with the Contractor and highlighted the various lapses," she said.

"The Contractor has completed the rectification work to the affected areas highlighted by the resident.

"Notwithstanding the rectification, action is also being taken against the Contractor under the contract."

The spokesman said that they have also updated the Stomper on the matter and thanked her for her feedback.

She requested residents with maintenance queries or feedback to contact the town council directly at the following numbers or email addresses: