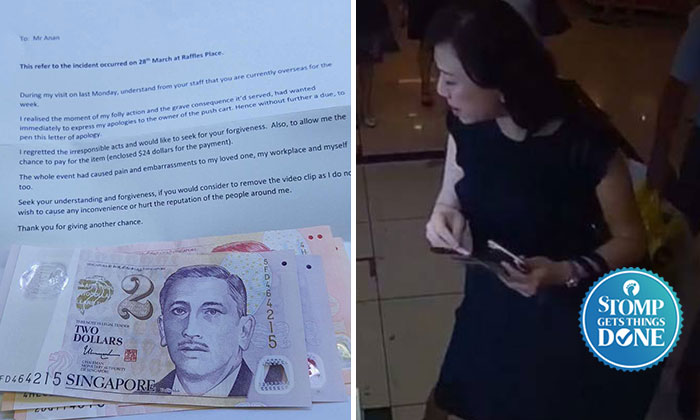 One of the two women caught on closed-circuit television (CCTV) footage taking a pair of earrings from Stomper Anon’s pushcart stall at Raffles Place has written an apology letter and paid for the item taken after Stomp's report on the incident.

On March 28, the woman had grabbed a pair of earrings and wedged it between her phone and some brochures while browsing through the wares at the stall.

She then walked off without paying, only to return again later, but once again did not pay.

Anon told Stomp that after the Stomp report on Friday (April 6), the woman had gone down to the stall on Monday (April 8) and spoke to one of his employees.

Anon and his family were on a vacation and not around in Singapore at the time.

The woman asked to see Anon, but upon realising that he was not around, asked the employee for his contact number.

The employee explained that she would not be able to give out such private information to her, and the woman subsequently left.

She returned the following day (April 9), handed an envelope to the employee, which she instructed to pass over to Anon.

Anon’s employee informed him about the visit and he asked the employee to open the envelope and send a photo of its contents to him.

Within the envelope was an apology letter as well as $24 for the earrings she had taken. In the letter, the woman apologised for her actions and sought Anon’s forgiveness.

"This refer to the incident occurred on March 28 at Raffles Place.

"During my visit on last Monday, understand from your staff that you are currently overseas for the week.

"I realised the moment of my folly action and the grave consequences it’d served, had wanted immediately to express my apologies to the owner of the push cart. Hence without further a due, to pen this letter of apology.

"I regretted the irresponsible acts and would like to seek for your forgiveness. Also to allow me the chance to pay for the item (enclosed $24 dollars for the payment).

"The whole event had caused pain and embarrassments to my loved one, my workplace and myself too.

"Seek your understanding and forgiveness, if you would consider to remove the video clip as I don't not wish to cause any inconvenience or hurt the reputation of the people around me.

"Thank you for giving another chance."

Anon said that he was relieved that the incident was over, and he did not have to resort to calling the police.

"She seemed sorry for her actions.

"I was going to call the police, but I have decided not to.

"As for her request on taking down the videos, I cannot comply. The videos are already on social media and out of my control."

He also had some advice for people who may have trouble resisting temptation at his stall: "I have six CCTVs installed here. I don’t understand what these people are looking at when they take things from my stall.

"I already placed up warnings as well.

"Moreover, my items are very affordable.

"If you don’t want to be featured in these videos, then don’t steal."

Related Stories
Pushcart owner calls out well-dressed women who took items from his stall at Raffles Place
Woman takes $168 watch from Raffles Place pushcart, returns 3 weeks later to do it again
Not the sharpest tool in the shed: Man caught stuffing axe under his t-shirt at Tampines shop
More About:
shoplift
theft
Stomp gets things done