Well done to ICA officers for keeping our borders safe, rain or shine 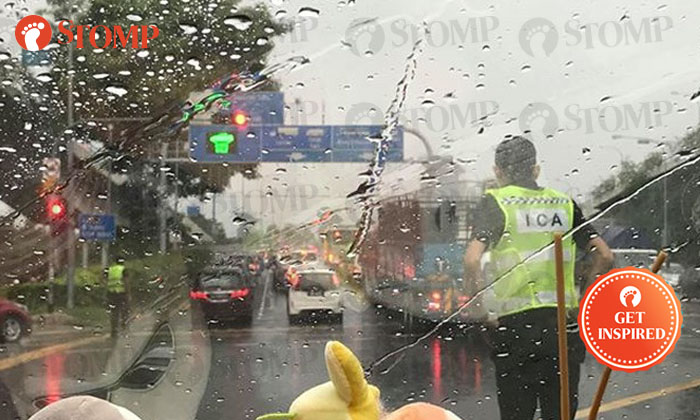 Stomper Jack and his wife were impressed by the Immigration and Checkpoints Authority (ICA) officers who were spotted dutifully doing their job despite the rain on Saturday (Dec 1).

The couple were in their car heading to Malaysia via Woodlands Checkpoint for a short trip over the weekend.

As they were reaching the checkpoint at about 3.30pm, they saw the officers standing in the rain directing traffic.

Stomper Jack said: "The officers did not have umbrellas or raincoats with them.

"The thing that really caught my eye, was that the officer standing in front of my car was shivering.

"He was drenched and looked like he had been out in the rain for quite some time.

"My wife and I really admired them for doing their job."

The Stomper added: "They are professionals doing their job, but we are all human beings in the end.

"I respect the officers and my wife and I wish we could have given them raincoats."

Related Stories
Biker who stopped to direct traffic gets Goody Bag: "When I saw it on Stomp, I knew it was a big deal"
6 men lauded for helping to detain suspects involved in outrage of modesty and public nuisance cases
Men rush to stranded uncle's aid in Woodlands after seeing appeal for help on Facebook
More About:
inspiring
kudos
heartwarming
heroes