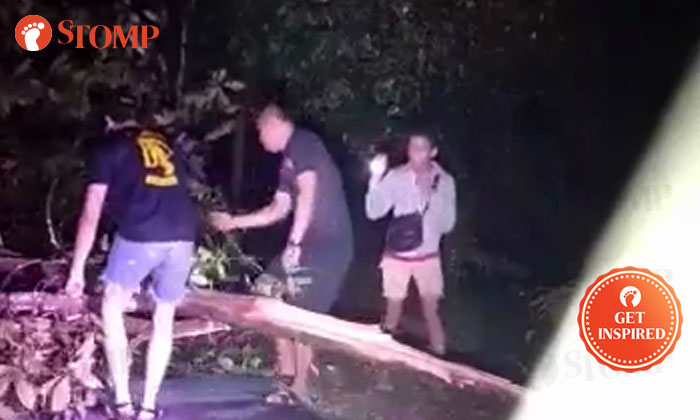 Three electric scooter riders, including Stomper Danish, took it upon themselves to remove a fallen tree that was obstructing a pathway at Ulu Sembawang Park Connector at 11.30pm on Tuesday (Sep 4).

In a video shared by Danish, three guys are seen jumping on the trunk of the fallen tree in an attempt to break it but to no avail.

One of the guys then jumped on it again, more vigorously this time, while holding onto his friend's shoulder for support.

When the tree trunk still failed to be broken apart, the three of them proceeded to try lifting it up with their bare hands.

It took a while but the three guys finally managed to move the fallen tree to the side of the path.

Danish said: "My friends and I were passing by and we came across this fallen tree.

"We hopped on it to try to break it apart then we pushed it aside to allow other passersby to get through."