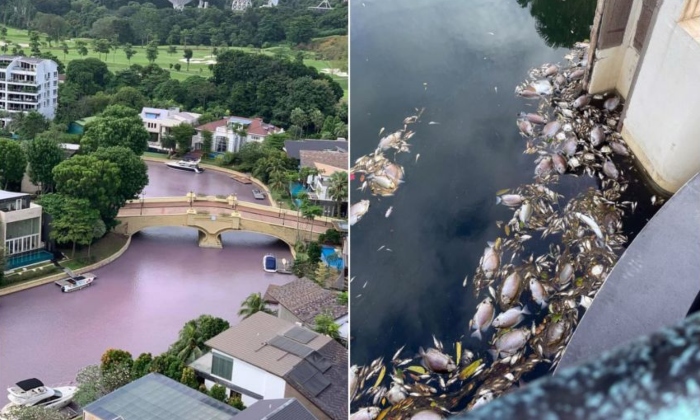 Warning signs emerged on Jan 5 when a foul, sewage-like smell came from the waterway. As the odour became stronger over the next few days, dead fish were found near the banks from Wednesday last week to Sunday.

Last Saturday saw the "largest clean-up and haul of dead fish", said Knight Frank Property Asset Management on behalf of Sentosa Cove Resort Management (SCRM), in a letter sent to residents on Monday, which was seen by The Straits Times.

In response to queries from ST, an SCRM spokesman said dead fish were observed in the waterway of South Cove between Jan 6 and last Saturday, and subsequently, a change in colour in the waters on Tuesday. The North Cove waterway has not been affected.

The resort management is working with the National Environment Agency (NEA) on investigations.

"As a precautionary measure, SCRM has advised residents to refrain from water sport activities in the waterway. SCRM will continue to monitor the waters," said the spokesman.

A bloom is caused when a large amount of algae or cyanobacteria accumulates in the water, resulting from high amounts of nutrients such as phosphorus and nitrogen.

Dr Leong said the heavy and persistent rain over the past couple of weeks may have contributed to the bloom.

"The fast-adaptation characteristics of cyanobacteria to sudden changes in environmental conditions, like the recent continuous rainfall, enable cyanobacteria to outcompete other phytoplankton or algae. Due to the rainfall, the light condition was low, and cyanobacteria could grow better in low light levels," he said.

The second monsoon surge for this month brought heavy and persistent rain to the island last weekend, and Jan 2 saw rainfall that was among the heaviest in 39 years.

The NEA said there is no indication of any industrial or marine pollution that could have affected the waters in the surrounding area.

Algae blooms can remove dissolved oxygen from the water, harming marine life. But it is unclear if the fish deaths and coloured water are linked, experts emphasised.

Common causes of fish deaths include oxygen deprivation, toxins produced by algae blooms, and high concentrations of algae species that can damage the gills of fish, said Associate Professor Federico Lauro from Nanyang Technological University's Asian School of the Environment. 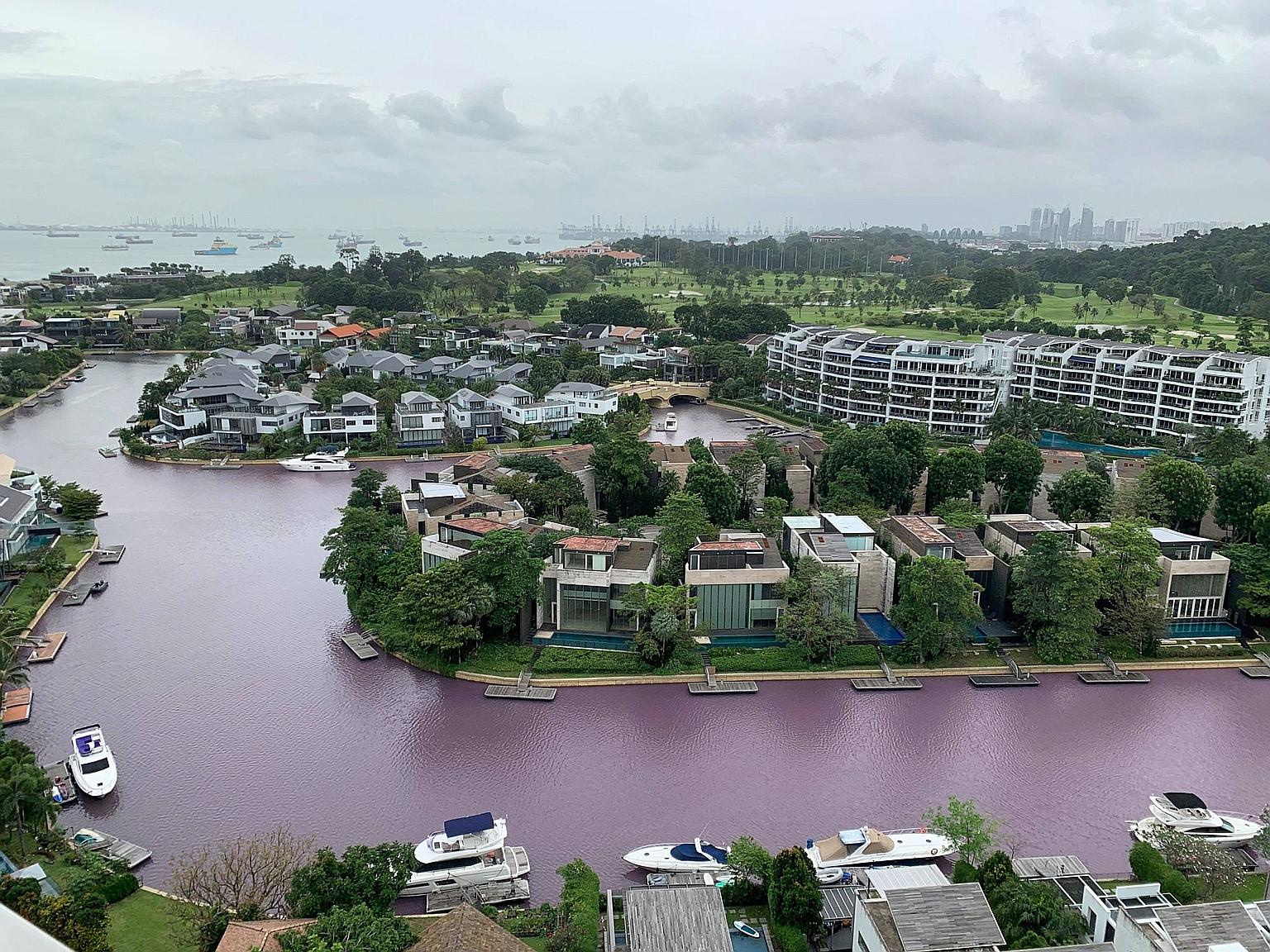 (The waterway running through Sentosa South Cove appeared pinkish-purple. Photo: The Heron of the Green Barrels.) 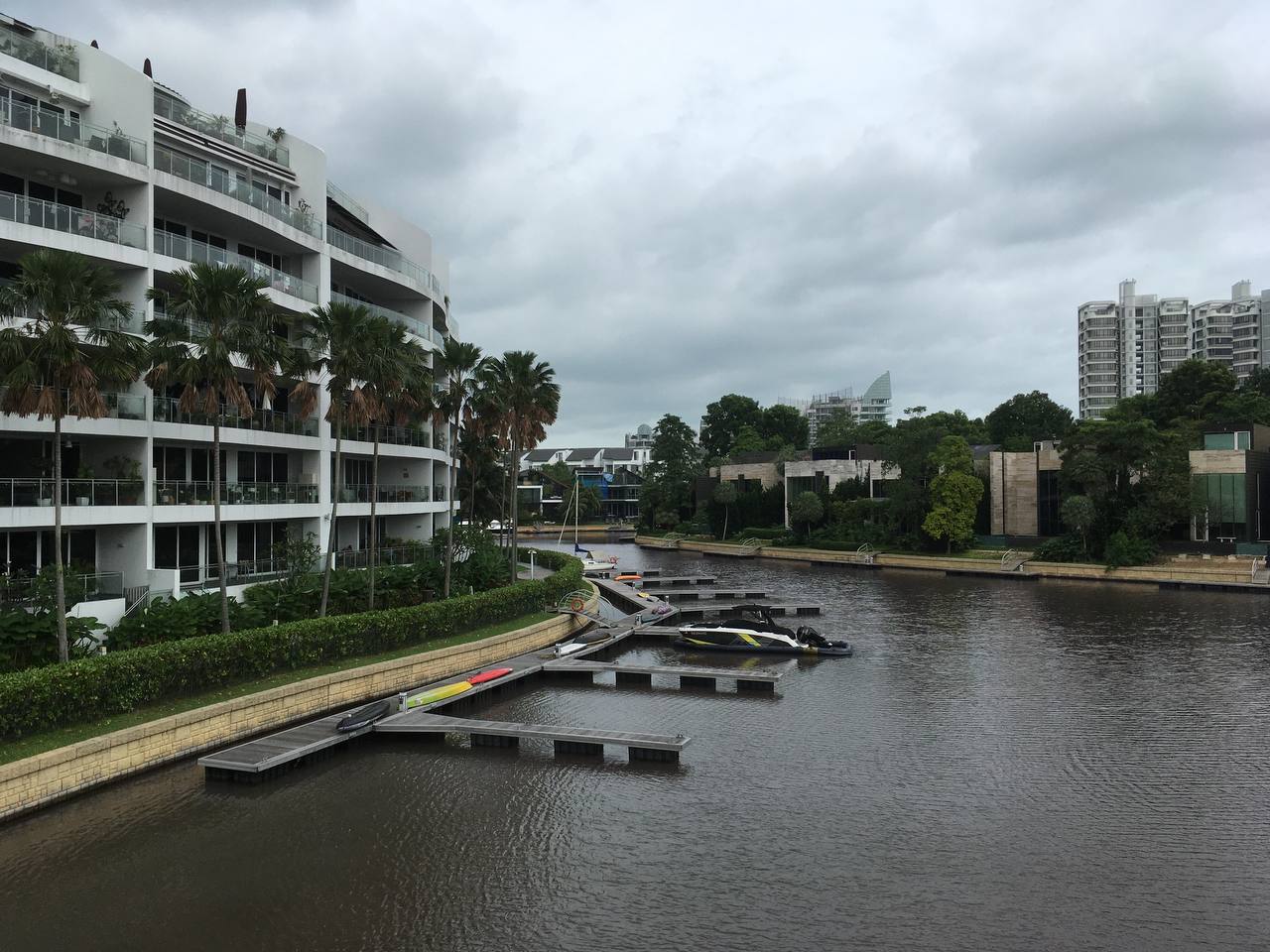 The letter on Monday to Sentosa residents said the waterways were combed on Monday morning and no dead fish were found, and the foul smell had also cleared up.

When residents thought the worst was over, the waters turned pinkish-purple on Tuesday.

"The smell during the weekend was awful. Even up on the eighth floor where I live, you could still smell it. It smelled like dead fish and sewage," said a resident of Seascape condominium who declined to have her name published.

Mr Dan Paris, 54, a resident of South Cove's Turquoise condominium, bemoaned how lifeless the waterway has become this past week.

"In Sentosa Cove, you have this marine life around you - fish, herons, otters. I didn't see any otters last weekend," said Mr Paris, who works in marketing.

"And the herons, eagles and kingfishers were picking up the dead fish floating in the waters. Those fish might be contaminated."

The experts said water circulation between the waterways and the seawater beyond South Cove can help to break up the algae and bring in fresher saltwater, which will increase the oxygen levels in the waterways.