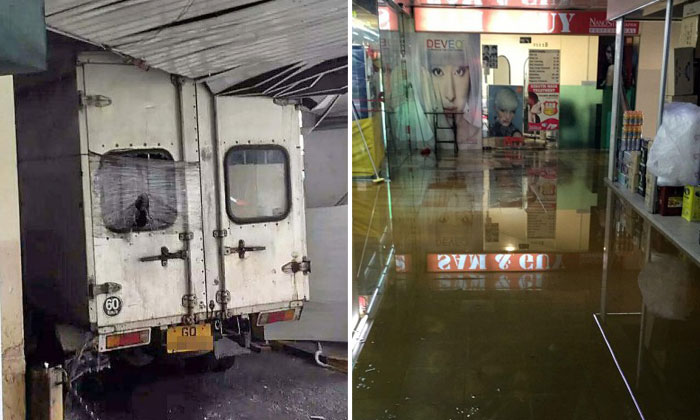 The sudden "showers" caught the tenants by surprise.

Ms Anita Yee, who works in a hair salon at People's Park Centre, was alone in the salon on the first storey on Monday at noon when she heard a loud bang.

"Then water started coming out from the ceiling. It was like a sudden downpour. I kept using towels to soak up the water," Ms Yee, who is in her 50s, told The New Paper yesterday.

The incident was caused by a broken sprinkler pipe in the mall's carpark, after a lorry rammed into it.

The mall's centre manager, who wanted to be known as Mr Teo, said the incident happened because the lorry was too big for the entrance of the multi-storey carpark.

Only vehicles with a maximum height of 2.2m as indicated on a sign are allowed to enter the carpark, but the lorry is at least 2.5m tall, Mr Teo said.

When the lorry driver realised he was stuck, he tried to reverse out of the carpark.

Showing TNP closed circuit television footage of the incident, Mr Teo said: "When the lorry reversed, it dragged out the sprinkler pipe. The lights were broken and the carpark ceiling (panels) fell off.

"We had to clear the mess. We tore down the ceiling board and got the contractor to replace the broken sprinkler pipe as soon as we could as it's a running water pipe."

As a result of the broken sprinkler pipe, brownish water gushed out from the mall ceiling and seeped into some of the shops near the entrance of the carpark on the first level.

Madam Ng Chiew Har said she thought it was just a minor incident until she noticed water flowing into her luggage shop.

With little time to react, the first thing the 60-year-old did was to move aside the pieces of luggage displayed outside her shop.

"Among those who were affected, my shop is the farthest away from the incident site, so the water flowed into only part of my shop," she said.

Still, the cleaning took a toll on Madam Ng, who spent two hours wiping the floor, alternating among three small rag pieces she usually uses to wipe down the luggage.

"My back and legs still hurt from all that cleaning up yesterday," she said.

Although there was no physical damage, the affected tenants said they saw a dip in business due to the mess.

The broken pipe was fixed by Monday evening, said Mr Teo, but the ceiling repairs will have to wait because the parts have to be ordered.

He added that he has yet to receive a quotation on the repairs from the contractor, and intends to hire a lawyer to claim compensation from the lorry driver's company.