Watch this talented 3-year-old skater girl drop into a 1.8m half-pipe in S'pore 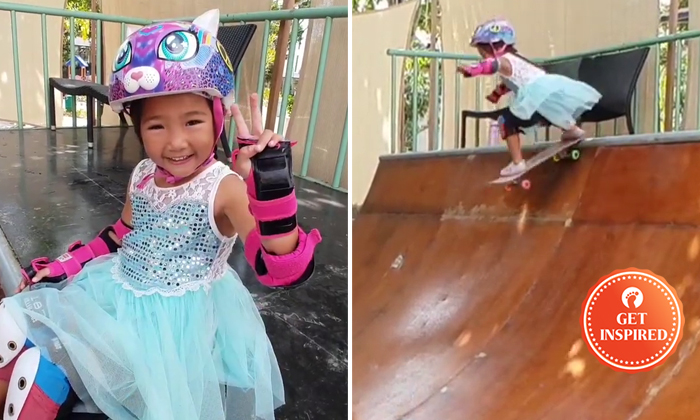 She might be only three years old, but Arya Griffin is already a master when it comes to skatebording and probably braver than you were at that age.

Her mother, Stomper Kim, shared a video of Arya dropping into a 1.8-metre half-pipe in the backyard of their home all by herself on Feb 5.

Kim told Stomp: "She is the youngest ever documented to have done so in the world (to the best of my knowledge) and most certainly is the first in Singapore."

The Australian-Vietnamese Stomper and her British-Filipino husband, Mark, have lived in Singapore for the past 13 years.

The couple also have a six-year-old son, Ryder, who is equally talented at the extreme sport.

Kim said: "Both of them have been doing this ever since they were around one.

"They were taught by their daddy, who does competitive wakeboarding.

"Ryder also has weekly classes with a skate instructor."

Not only has Arya's half-pipe video gone viral on Reddit, she has even been featured on American television programme 'Right This Minute'.

One Reddit user commented: "Mad props to her. I skateboarded for years when I was younger and dropping in was one of the most intimidating things. If you hesitate at all, you’re gonna wipe out; you have to fully commit."

Another said: "Seriously impressive. I was 14 when I first tried dropping into a halfpipe and fell flat on my face. Wound up being way harder than I thought it would be."

Others also chimed in on what they themselves got up to at the same age:

Related Stories
Prepare to be blown away by this 10-year-old pianist at ION Orchard
This woman singing at Tanjong Pagar Plaza deserves to be noticed
Wa! This man at economical rice stall in Holland Village is worth 4 workers
More About:
amazing people
talent
child
cool